Where did we leave off yesterday?  Oh yeah. In Toronto, with travels plans in disarray, and the only feasible option for getting to NYC would take 12 hours.  Our 5:30pm Greyhound from the airport left at 5:15 (with us on it) to get us to Toronto , where we would change busses for the one to goes to New York at 7:00pm… which becomes more like 8:00pm.  I went to the canteen at the bus terminal to grab a sandwich, but really didn’t need to rush. Basically they just line people up and whoever is in the line fits on to whatever bus turns up.  So we ended up on the 8PM one – but they at least we’re on a bus, no dramas.  Its all first-come-first-served when boarding, so only a small number of lucky people get the window seats (not us) , and we have to sit apart.  It’s OK, my neighbour keeps to herself, and we all settle in for the journey.

There’s not too much to be written about long bus trips . I’d heard some kind horror stories of Greyhound journeys, but our little team of passengers weren’t too bad all things considered.  There was one person who maybe thought we wouldn’t all notice he was puffing on a special cigarette in the loo a few times… it’s not my thing, but if you’re stuck on a bus for twelve hours you probably can’t blame ’em.  There was also a guy, older than us, who was looking at naughty pictures of gentlemen on his phone – we only knew this coz an even older lady a row or two back gave him a good ticking off about it, as she was sooo disgusted.  But of course she had to sticky beak, right?! Anyway, just another few aspects of life’s rich pageant, I guess.

We got close to Niagara Falls again which was amusing, and before long it was time to cross the border.  I wondered what would happen – and is pretty darn efficient considering what we had to do.  Everybody off the bus.  Everybody get their luggage (both handheld and checked baggage) and into a room where we’re all processed and interviews by US Customs, and get all our baggage scanned and x-ray’d. Then all the checked baggage goes back under the bus and everyone returns to their seats – but again it’s a free for all but this time Perry and I ended up together.  This was also a bonus coz only the window-side people had access to power, so I would no longer need to keep my phone on like 1% brightness to make sure I didn’t run out of battery 🙂  Welcome to the USA!

Our next stop is Buffalo – only ten minutes away.  This is when we learnt of a change of plan.  Everybody off the bus again, everybody grab your checked baggage again, everyone stand in a big room again .. they must shuffle things around to make sure they have the most bums on the most seats at every opportunity, as a fair few people were only going as far as Buffalo.

This inconvenience paid off though – we had a nicer bus, and we thought we had spare seats, and we both got a window, woo! But then other people came on and filled up the gaps, but so what, I had a phone that was charging so hey, priorities, right? 🙂  Happily Perry was also in the same kind of situation. A window, and a charging outlet.

I was pleasantly surprised to find I maybe slept an hour – more than I was expecting, really.  Most of that was probably after 6AM, as I saw a pretty sparsely populated area, and when I woke up, we were only 10 minutes away from our destination, Port Authority Bus Terminal, New York City.  We made it.  We felt like shit, and possibly looked worse, but, we made it!

Then we had to walk, with our roughly  65 kgs of luggage, to the hotel, about 5 city blocks away.  It was uphill, but at least it was a very very gentle hill. We were really quite lucky – because for much of the tail end of the bus trip the rain and weather was fierce, probably the rest of what had shut down most flights going to LaGuardia.  But when we found the way out of the bus terminal and on to the street … it was dry.  A little bit before 7 we reached the hotel, feeling equal parts triumphant and exhausted.  And really hungry, and really really thirsty.  (A good tip that we took – don’t drink much, there aren’t many wee stops and apparently the onboard bus toilet can be pretty nasty).

We’re staying at the Hotel Edison.  For New York, the room is a good size – maybe a little bigger than the one we had at San Francisco, but smaller than everywhere else we’ve stayed.  The view, well, it’s a view directly into windows about maybe 5 metres away.  But at least we can tell if it’s night or day.  Mind you, in New York, that doesn’t often matter.

Selfie in the hotel lift

Once we were settled in the hotel the most important thing was a nap.  A fractured sleep of one or two hours isn’t the best way to face the day, so a couple of hours solid sleep were most welcome.  After all, we had a show to see, the reason why we had to get the bus and couldn’t wait for the next available plane.

Harry Potter and the Cursed Child, parts One and Two. 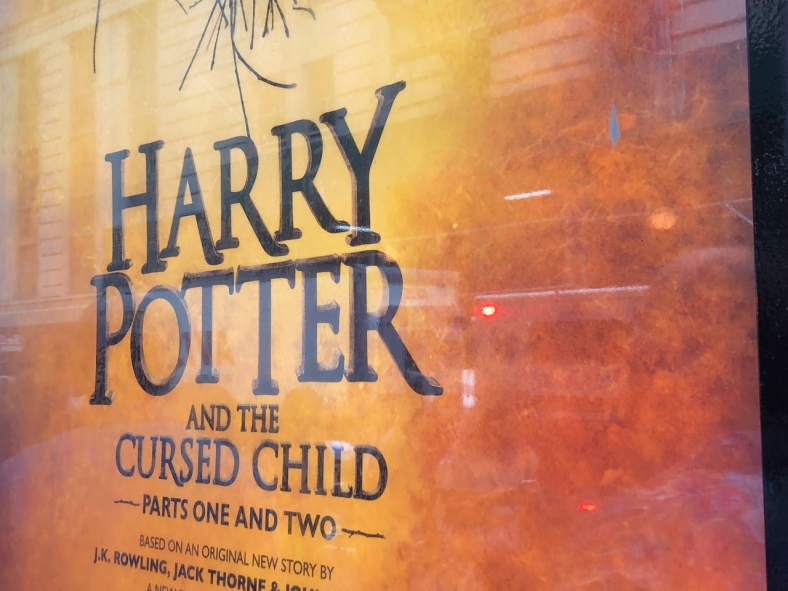 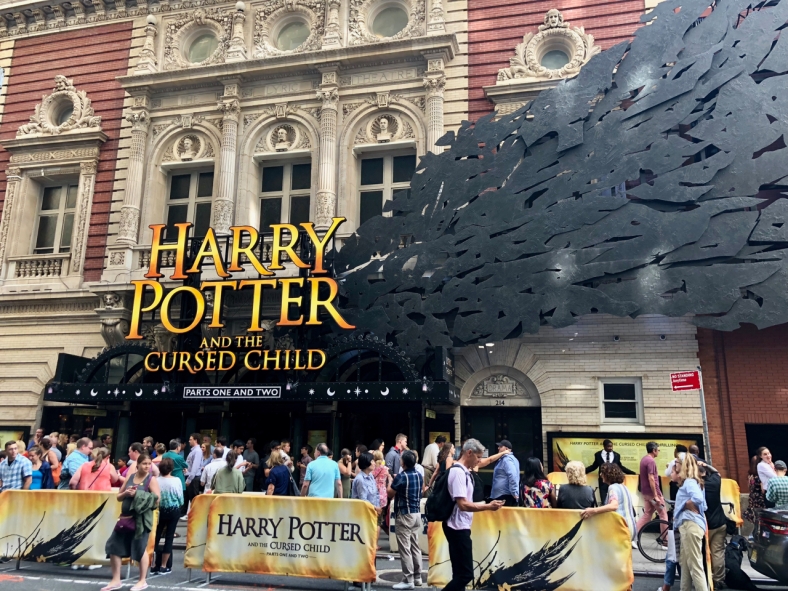 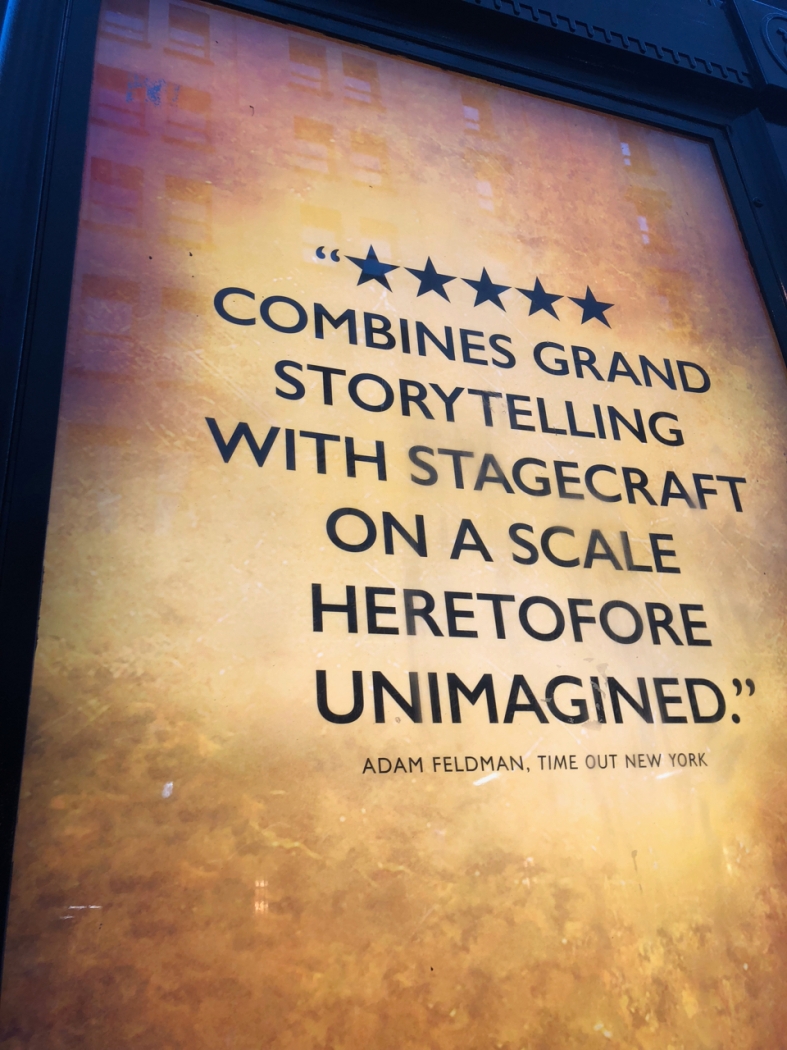 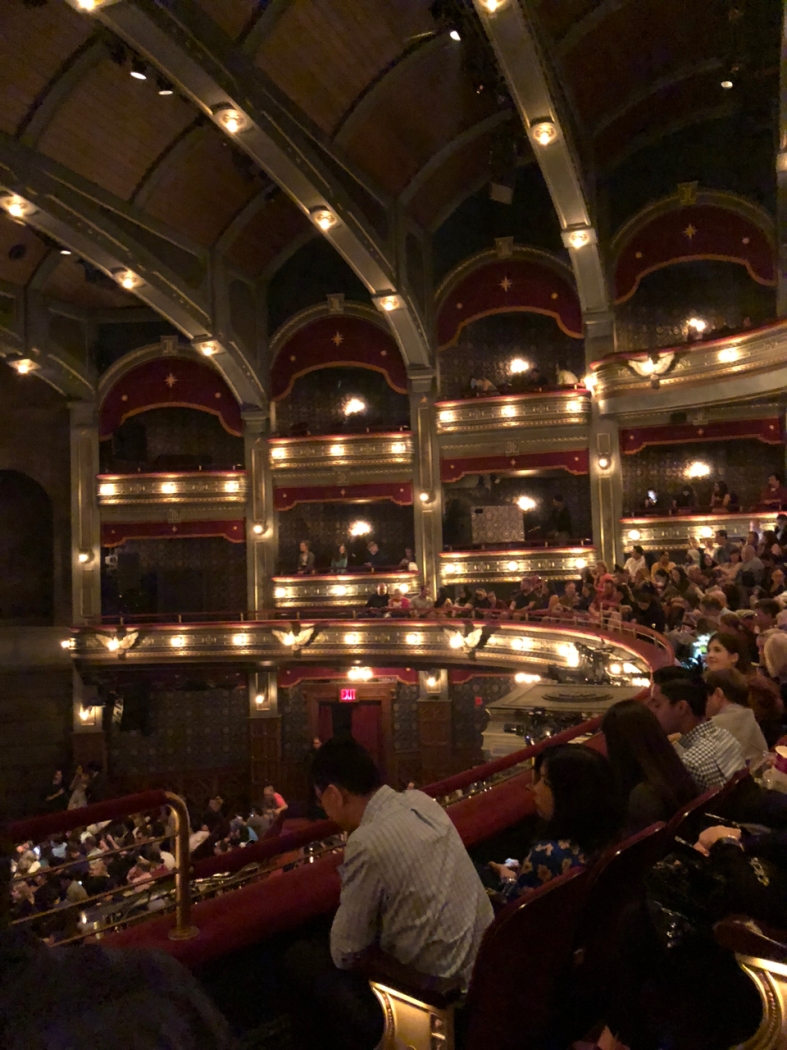 Part One started around 2:00pm.  I won’t do spoilers, I will indeed #KeepTheSecrets as they keep urging us to, but if you’re even vaguely interested in Harry Potter, do go see it.  Great performances, the way they use the stage and indeed the entire theatre is amazing, inventive, unexpected … really cleverly put together.  It’s looks just stunning, and it does have its share of ‘how on earth did they do that’ magic.  Really, really smart.  Loved it.  And a brilliant cliffhanger.  I want to go on and on about it, but I’ll be good, and stay quiet.  And it might be a funny thing to mention but Andrew the guy just serving drinks at the theatre bar seemed every bit as excited as us customers about the show. It was a really nice way to begin.

After Part One finished, and we picked our jaws up off the floor, we went back outside in to the crazy heat and humidity.  It was feeling like a Sydney summer – hot and sticky.  But this was one of the free weekends where in NYC they close of parts of the city to traffic, for ‘NYC Summer Streets’.   8th Avenue was closed to traffic for ages and there were tons of street markets stalls selling all kinds of stuff – food, souvenirs, trinkets, clothes..all sorts of good stuff.  We had a wander through, and at a place selling sunglasses this couple started picking out glasses for us, having a ball.  They assure us they had nothing to do with the stall owner, they were just having fun picking styles for people. Well, it worked in the stall owner’s favour, I did end up buying a pair of sunnies for the very expensive price of $7 – mainly because I’d left my sunnies at the hotel, as it was overcast when we left for the play.  For $7, lets see if they last for seven days.  One strange thing about this market was that even though the Avenue was closed, the streets weren’t – so for an unsuspecting tourist it would be easy to talk down the avenue and not realised that a car might zoom right across at any moment – seemed a bit odd but didn’t hear of anyone getting knocked down.

We also enjoyed a slice of pizza from another stall, (and yep we did the ‘new york fold’ of course), and some fried ice cream. All good!

By this time to beat the heat we went back to the hotel, but not for long because it was time for Harry Potter and the Cursed Child Part Two, starting at 7:30.

I gotta say I have so much respect for the cast – because it’s all the same cast from the first play.  Man that is a LOT of lines to learn – and perform – in just one day.  Very impressive that they have to energy to do that.  Andrew our drinks guy was also there, just as enthusiastic as before, and just as excited to see the show as every customer he served.

It was just before Part Two that I learned of a company called ‘Ordertorium’. They work in conjunction with the theatre – basically, you order stuff, and they deliver it to you either before the show or at intermission.   The app was simple to download and setup so I gave it a go.  Sure enough, as soon as intermission started, just like magic someone appeared with an armful of paper bags, one of which was for us, containing two ice-creams, as ordered. Lovely!  A clever idea, sure beats queueing.

So yeah, again no spoilers, but I do recommend seeing both parts on the one day if you can -you won’t want to be left waiting.

After that, well it’s late night at Times Square, and that means a stupid amount of people.  It took a heck of a time to get back to the hotel, but we managed it eventually, so all good. It will be something to keep in mind though – allow plenty of time when trying to get to anything near or on the other side of Times Square.  It’s hectic!

Speaking of which I think our first day in NYC has been hectic enough… so time to hopefully get a proper, not-on-a-bus, night’s sleep.  Night! 🙂

One thought on “Harry Potter and the Greyhounds of NYC”