“Breakfast at Timmy’s”. Wasn’t that a movie? OK, not quite, but was a convenient way to shove food and coffee into our gobs, not far from the hotel.

We had a go on the subway – very clean, pleasant, slightly confusing – the last of which is pretty much standard for any mode of transport you visit for the first time.  But we now have our Presto cards to add to the collection of Opal / Clipper / oyster / AT Hop / etc, etc.  There was some cool buildings and fun public art near St Andrew station.

We were aiming for the Queen St shopping district, and after a few short stops, there we were.  The subway had a cool little map showing where the train was headed and what the next stop was – very handy. 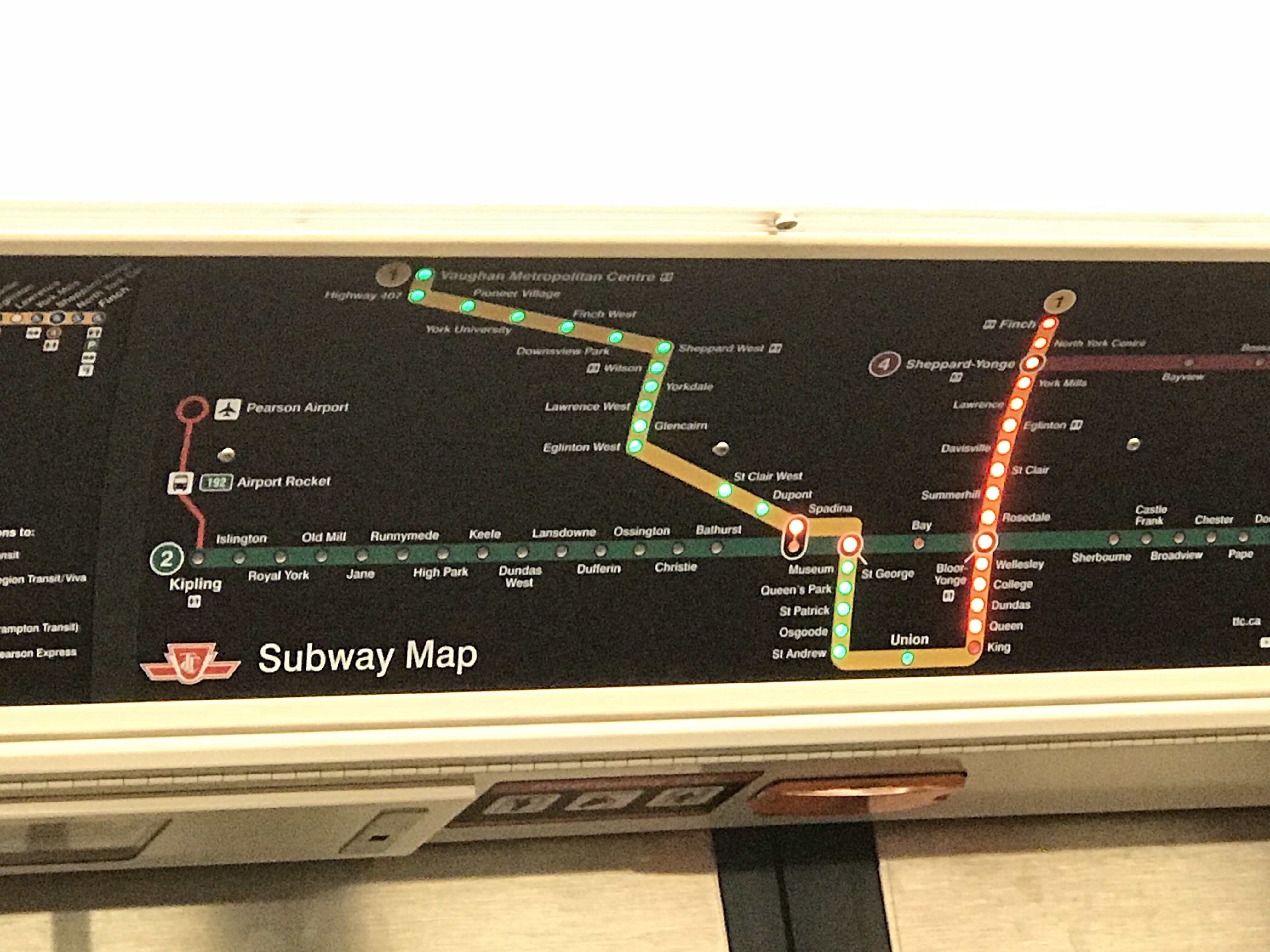 Exiting at Queen Station (hey, it seemed appropriate! 🙂 ) we started wandering.  Before long we noticed it wasn’t quite the shopping mecca we thought – but seems there’s a very big distinction between Queen St East and Queen St West.  Not that there’s anything wrong with the East End 🙂 After a few blocks, we decided to Go West (life is peaceful there haha).  It’s more than just shops though – old city hall, new city hall, a number of pretty places all around.  And a dude cleaning the floor of a pond in a little floor-cleaning-golf-buggy thing. Nice!

How handy – a self-captioning photo 🙂 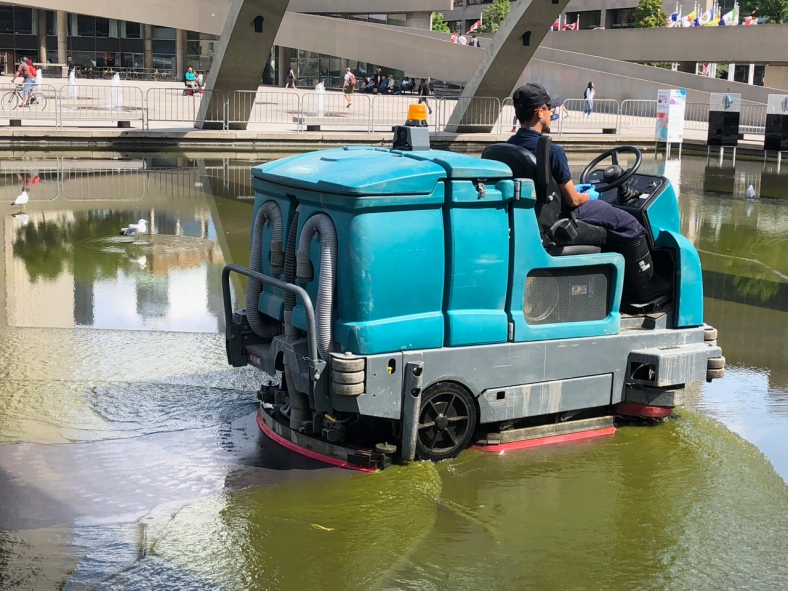 Not a very deep pond. Also an ice rink in winter I think.

Building reflected in a building

We had a good wander around, popping in to the occasional shop, and having a break for a cold drink, before wandering again. Then we happened upon a couple of dickheads holding what they said were picture of aborted foetuses and spouting a bunch of nonsense, probably trying to somehow justify how a woman should not have a right to what happens in her own body.  Like I said, dickheads.  Because I’m nice, and kind, and quiet, I couldn’t help but call out “Shame on you!” as one of them tried to hand me a brochure.  Ugh.  Go away, you awful, awful people. But enough of the lunatic fringe, which seems to find a way to infest all corners of the planet.  It was beautiful sunny day, so we just kept a-wandering a while longer.

After returning to the hotel, Perry opted for a nap, and I went for another walk around to sample one of the many hip-and-happening coffee places that I’d seen.  I settled on “Strange Love” coffee which was nearby.

As soon as I saw they had flat white on the menu, once again I knew I was in good hands.  Sure enough, a few minutes after ordering I was presented with a cup of coffee that tasted just awesome.  Close your eyes and you could have been in a little Melbourne laneway somewhere.  Deeeelicious.  At least a 9/10 on the iScott Coffee Scale.  Coffee fans – get yourself to Strange Love if you visit Toronto.

I also a few more sights on my travels around the place, including some people hand-painting a giant Apple advert mural on the side of a building. 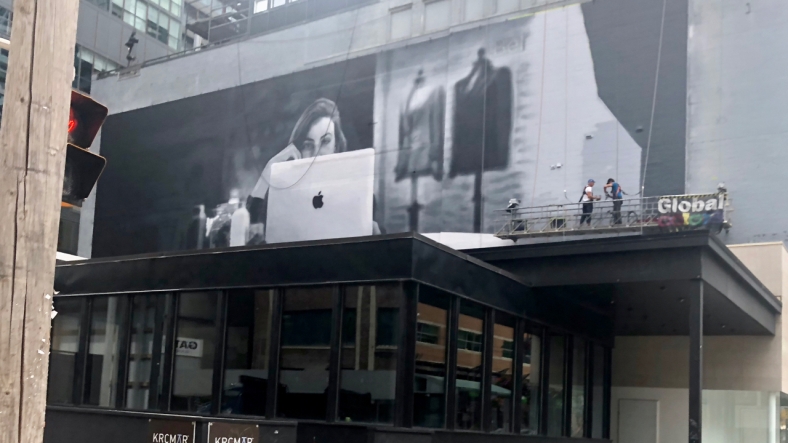 Considering we both skipped lunch, we headed out pretty early for dinner, catching the train (or, since there are 5 different train networks, we caught the TTC) up to Dundas (ie Times Square). There we found a thing that all cities should have. Or at least Sydney. All-you-can-eat sushi, oh yea it’s a thing. A very good thing!! They basically throw you an iPad, you press a bunch of buttons. And delicious sushi and other Japanese delights keep arriving at the table. Brilliant! All you can eat? Challenge accepted! 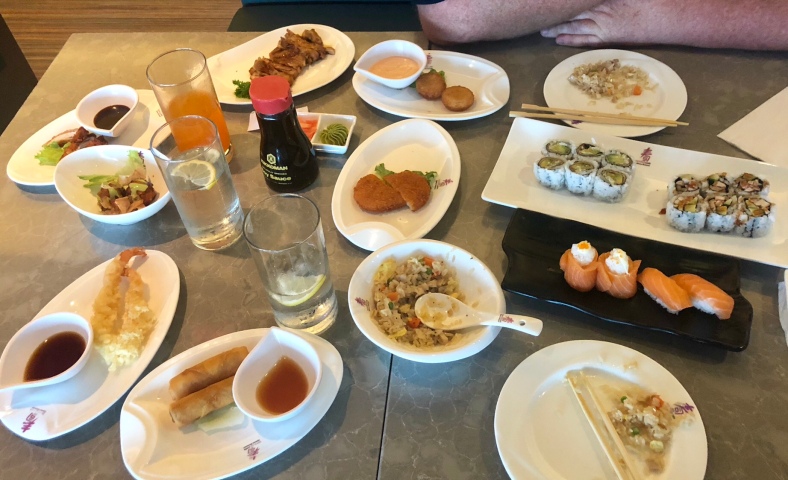 That was only round one – we managed a bit more after that. One thing I really liked though, was that they had a food wastage charge – in other words if you go completely stupid and order way too much, you will get charged for wasting food – and rightly so. The food was all delicious, too. And no, we didn’t waste a single bit.

To waste a bit of time we walked around some of the Eaton Shopping complex – a pretty ginormous mall.

Nordstrom has some pretty crazy things – like rather diaphanous Burberry scarves for only $600. Good grief. The mall also had an Apple store so of course I had to take a souvenir snap lol.

Next thing we knew it was time for the show – Wicked. The Ed Mirvish theatre is very pretty – it’s no State Theatre but still a good dose of grandeur about it.

Yes we’ve seen Wicked a bunch of times but it’s always a good show so why not see it again. Sure enough, it was as good as ever. Brilliant performances from the whole cast, and while it wasn’t the strongest Elphaba we’ve ever heard, she still gave it her all for Defying Gravity, the defining moment of the show. At the end I think basically the entire theatre was giving a standing ovation, so yep all the audience was pretty thrilled with it. It was also great hearing a few people gasp at a pivotal moment – there are still people seeing it for the first time.

After that we eventually made our way out the theatre (that was kinda hard work!) , then jumped on he wrong train platform – oops, ah well that’s $5 in stupid-tax coz we had to load more money on to the presto card. There’s no such thing as “tap off” – so as soon as you tap on you have spent your money, and we needed to tap on again to go to the other platform. Never mind, all part of the learning experience 🙂

The train trip was no trouble – and maybe this is a small thing, but it always heartens me to see: a (I will take the liberty of assuming) couple, girlfriend and girlfriend boarded the train, having a bit of a snuggle and whispering sweet nothings in each other’s ears, and nobody batted and eyelid. It’s one of things that can say a lot about a city. So, Toronto, well done you. There are still plenty of times and places in Sydney where this kind of behaviour is met with verbal abuse or worse, and it’s something you kinda need to be a bit wary of every day. But good on you Toronto in this instance. Always makes me happy when people are allowed to be themselves.

We made it back to the hotel with no dramas, other than having to swim upstream against all the people who had just exited a performance of The King and I nearby. The end of another great day.

Tomorrow – finally we’ll get up that big tower and have a look around. And much more besides. Stay tuned!

2 thoughts on “Toronto and a show”