Forgive me father, for I have gone to Starbucks and not Timmy’s for breakfast. It’s attached to the hotel so it was convenient for a nice quick breakfast. They even had Flat White on the menu, and it was, well, passable. I’ll give it 6.5/10.

Happily this all happened after a nice long sleep, think I’m finally recovered from the 4am start the other day.

Breakfast was a bit of a quick affair as it was time to join another tour. I think we were both a bit excited about this one – as you might’ve guessed from the title of today’s entry, it was time to visit Niagara Falls.

We met our friendly tour guide, and after a few more hotel pickups we hit the highway and headed off on the roughly 90 minute drive. The urban sprawl gave way to masses of power pylons, and eventually, things turned a little greener.

As the traffic built up again, we knew we must be getting close. Ok, well it was kinda obvious when our tour guide, (doing her best to talk over a noisy crowd of people behind us who were all sure they knew more about their chosen field of work than the person with whom they were loudly conversing ) did her best to let us know.

Much of the traffic was due to people wanting to cross the “Rainbow Bridge” to the USA – as the Niagara Falls spans the USA and Canada.  Our tour bus stopped at the top of the Canadian (of course) part of the falls – also known as the Horseshoe Falls.  Spectacular.  Even from the top, the ridiculous amount of water just washing through and dropping off the edge was amazing.  As was the amount of ‘mist’ being thrown up in the process.  It was like proper rain, not mist! But wow, what a great sight to behold.  It’s one of those famous things your always hear about but in a way you never think you’d actually get there to see it.  It was kinda like when we went up the Empire State Building five years ago.  An amazing feeling to really be here, at the actual thing, taking it all in. 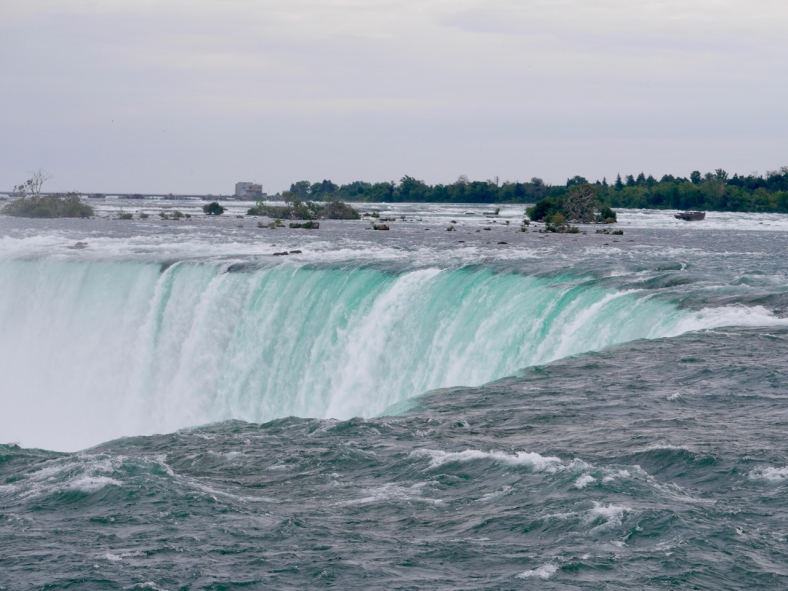 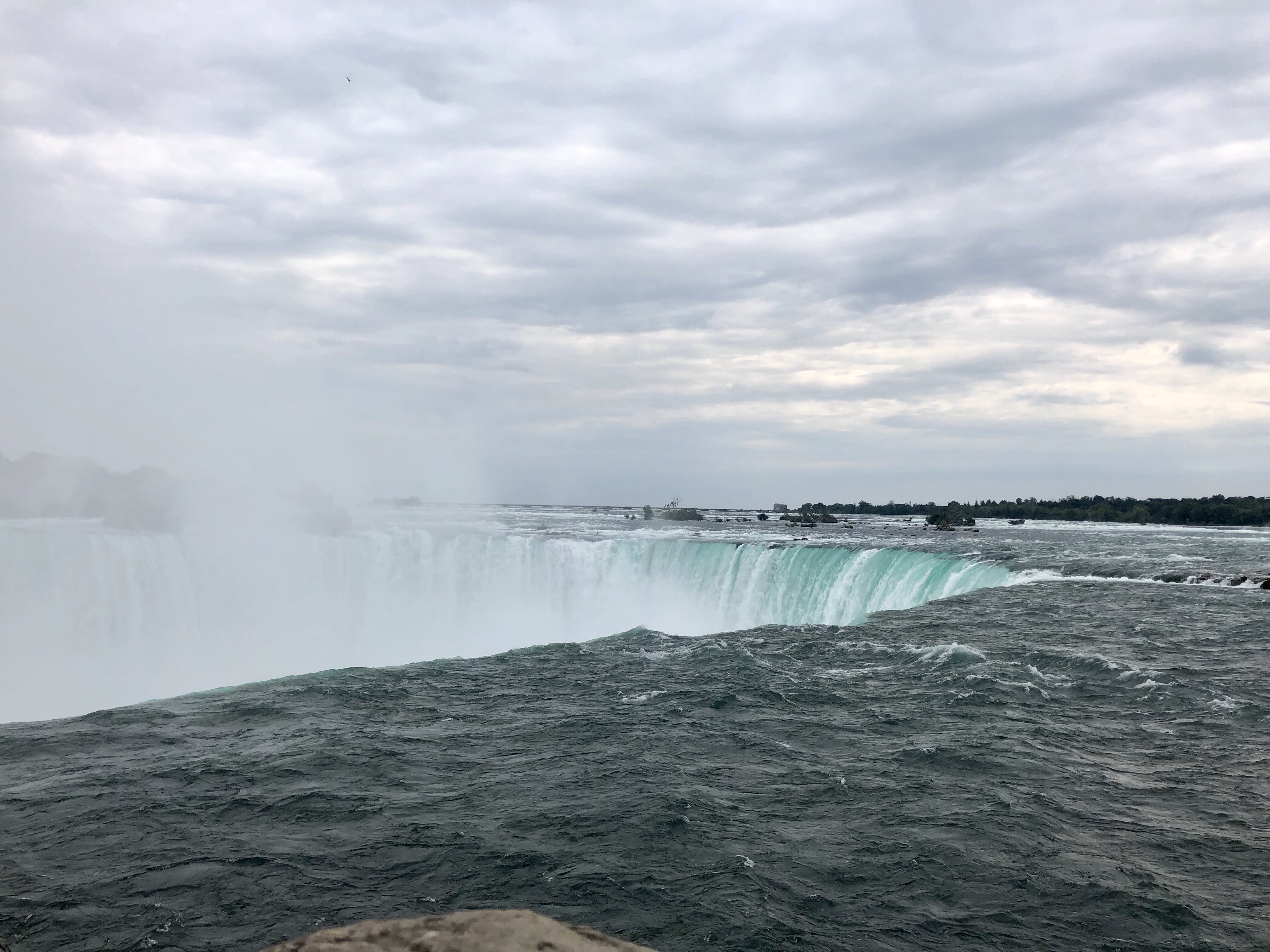 In this case we couldn’t really take it all in as we only had about 15 minutes to grab photos.  All, however, for a good cause – because the next stop was the boat that takes you up close and personal to the falls themselves, at the face of it, where it all happens.  After only a small amount of queueing we were handed our lovely red plastic ponchos – and with about 698 other little red riding hoods, off we trotted, on to the boat.  Does anyone remember the old computer game Lemmings? It kinda looked a bit like that as we all walked along the snaking queue. 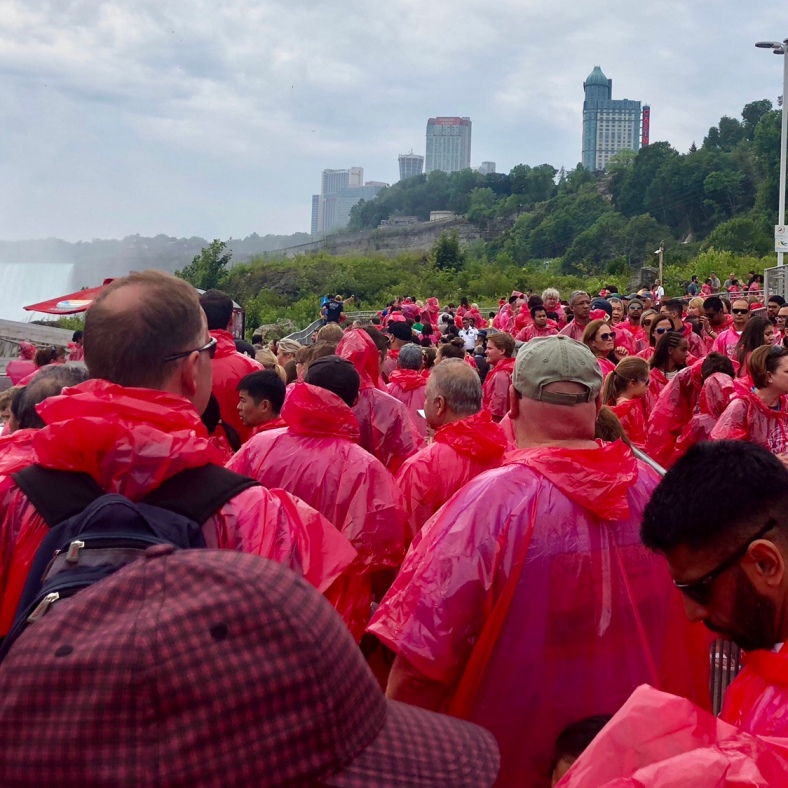 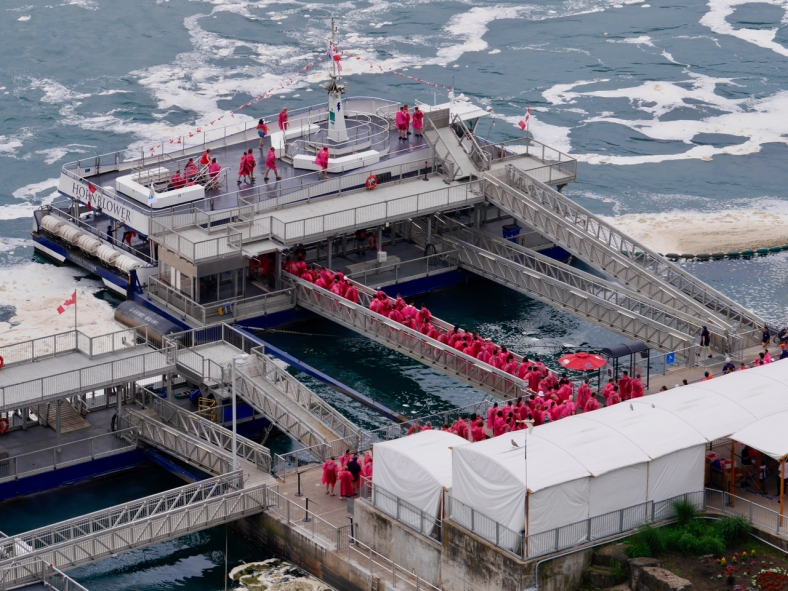 Next minute – we’re off!  First, past the American part of the falls.  It really must tweak the Americans that they have the deeply inferior part o the bargain here.  The falls aren’t terribly wide, and it’s not a big drop – mainly on to large rocks rather than straight down the lake below.  The Canadian side, however, is this grand big magnificent horseshoe waterfall throwing tons of water off the edge every second, resulting in a lot, and I mean a LOT, of water being thrown back up as ‘mist’ when it hits the bottom.  As the boat drew close tot he bottom of the falls, the ‘mist’ became ‘torrential rain’ and the little red riding hoods we had on became very welcome indeed.  By that stage you could hardly see anything such was the volume of water hitting your eyes, but it’s all part of the fun.  Amazing to be that close to it, hearing the roar of all that water even when you couldn’t really see a thing.  The bot ride was only 20 minutes, but that was enough – any longer and I think even the red anorak wouldn’t have stopped all the water.  It was such fun though. 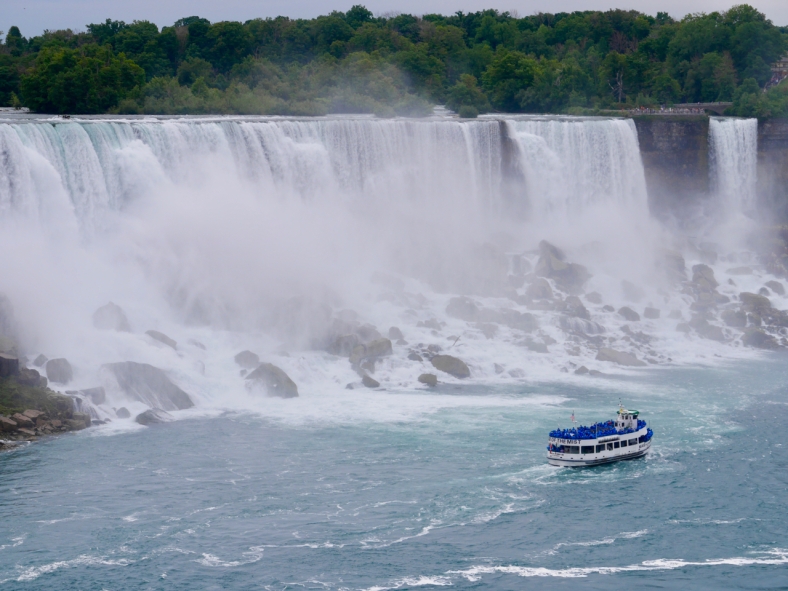 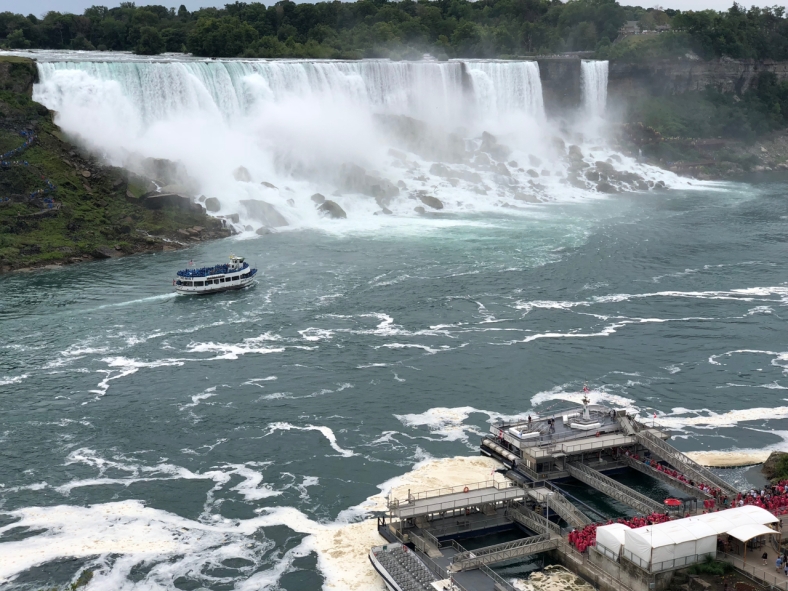 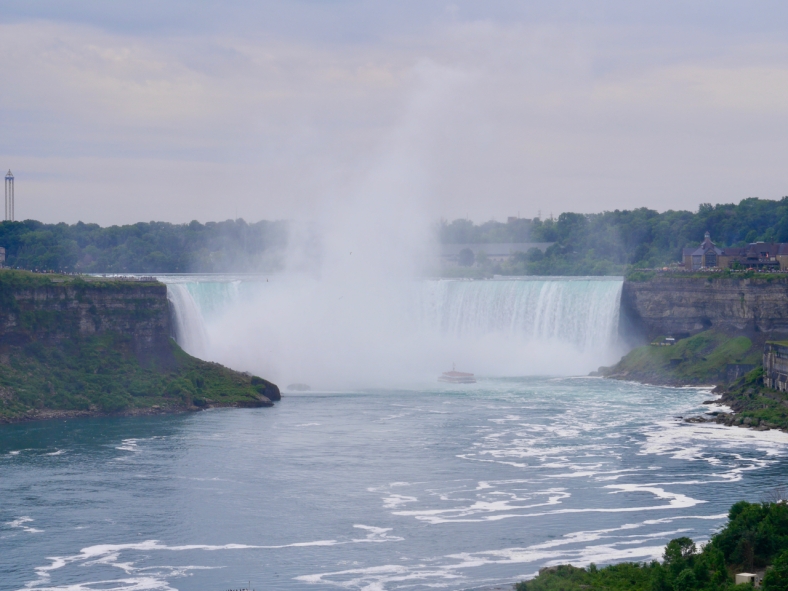 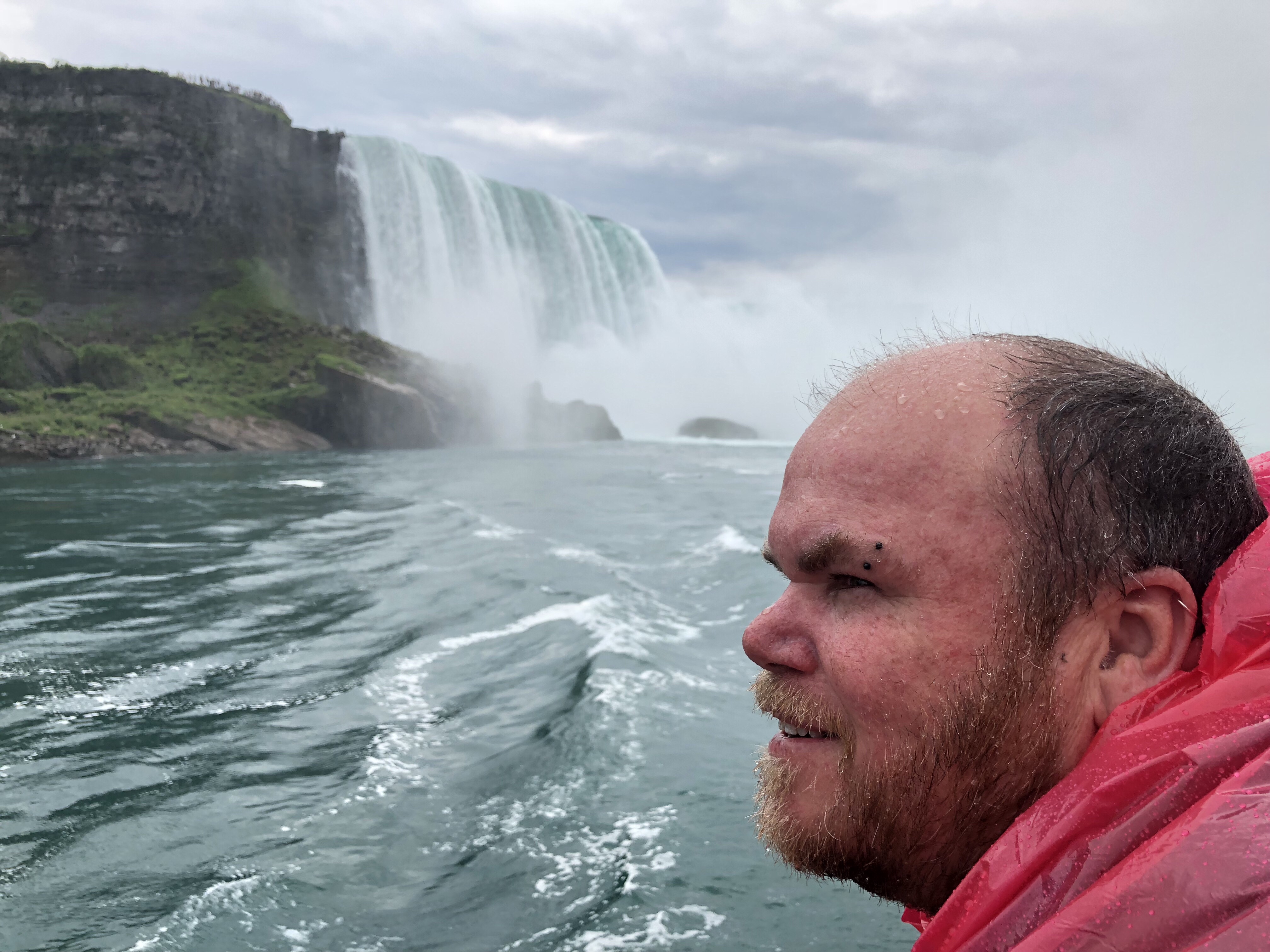 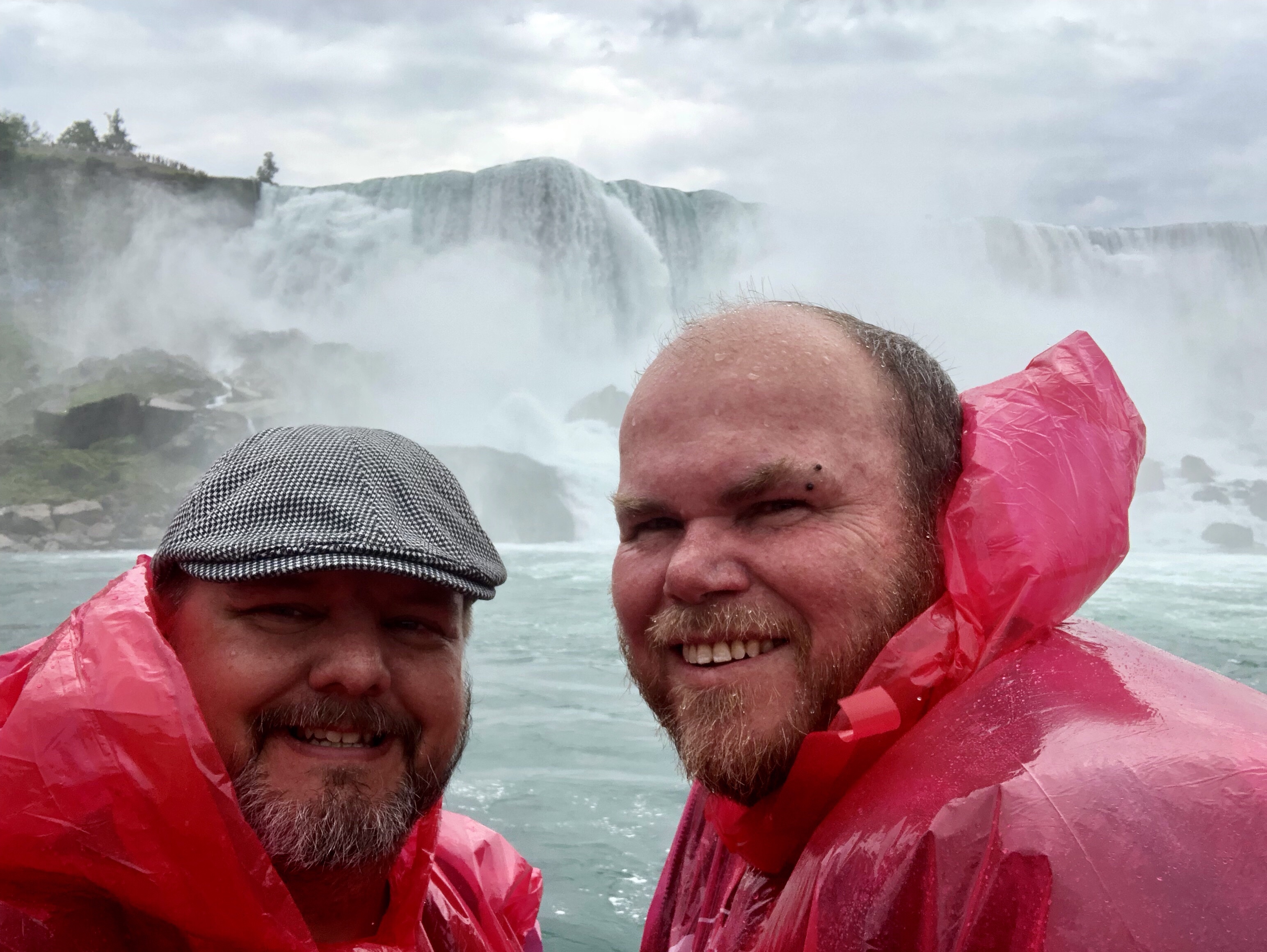 After exiting through the gift shop (of course) – we had about an hour of free time before the lunch that was part of the tour. At this point it was surprising the see Clifton Hill.  I know it’s fully expected that Nigara Falls would be very touristy – but this was border on Vegas tacky levels of touristy.  Flashing lights, big signs, the works.  But it did have an ice cream place called “Sweet Jesus” so that was a least amusing. 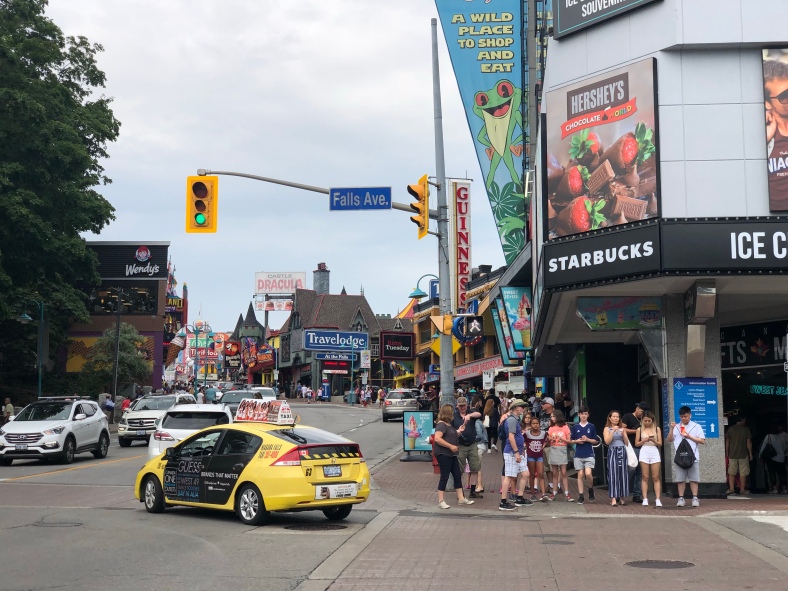 Lunch was a buffet at the nearby Sheraton Hotel – and a very good buffet it was too.  It wasn’t too hectic despite the busload of people who were all arriving at the same time.

After enjoying lunch and getting back on the bus, next stop was the lovely, but not exactly nearby, village of Niagara-on-the-Lake.  What a lovely little town.  It’s like someone found a village, then carpet-bombed it with several thousand litres of Quaintness.  Lovely old buildings, lovely old shops, lovely gardens, lovely hanging baskets full of flowers, more lovely than professor lovely of lovely university with an electric lovely-ing machine.  Lovely.  It also afforded a good opportunity to just sit in a park for a little while and chill. 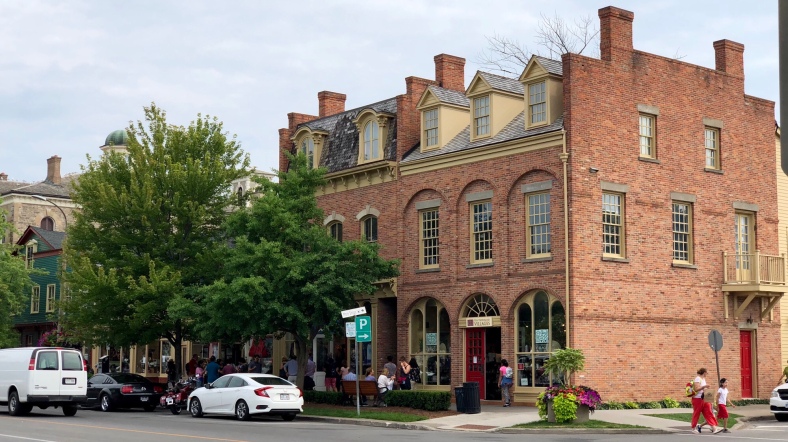 There were a few more stop-offs on the tour – another gift shop, a place that sold nice ice cream (hurrah!), and a winery, before the bus finally made its way back to Toronto proper, arriving around 7:30 in the evening.  Another big day – sitting in a bus doing pretty much nothing can still take it out of you!

Perry had done a good job with the buffet lunch (it was a pretty late lunch) and so wasn’t up for dinner – but I wandered across to the road to what is kind-of the other half of “Fred’s not here”, called Red Tomato.  A pizza and pasta place – and sure enough, delicious pizza.  A glass of Californian merlot didn’t hurt either. 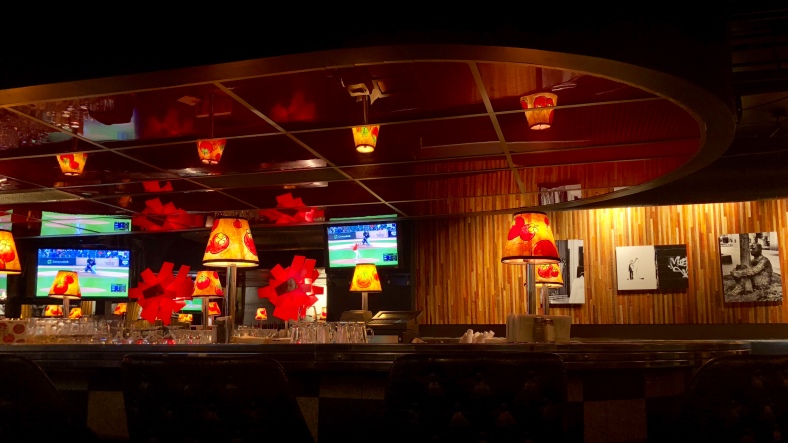 Even though it was nearly 10pm when i went back to the hotel, the restaurant district was still buzzing, plenty of people out and about, having a good time.  Always nice to see.

Tomorrow isn’t chock full of plans, but the evening should be good – time for a New York warm up of sorts, we’re off to a show 🙂