The day started a little strangely.  We woke up, opened the curtains, and the view was exactly the same as the night before.  How weird – it hadn’t been like that for a week!  But  I guess this is life back on dry land 🙂  A pretty strange view, too…

It was a very early start, out the door at 6, to get to the Rocky Mountaineer.  The great service started as soon as the taxi pulled up.  Before we could get out, somebody was already unloading our bags.  They then pushed the trolley to the checkin desk, where we got the formalities out of the way and received a little enamel pin as a little memento.  It was a case of hurry-up-wait, as we sat in the station for an hour before boarding began. Still, it was a nice big station,  specifically for the Rocky Mountaineer.  Surprisingly the music was live – on egg and his flute, filling the whole pavilion with sound.  Kudos to him, he played nonstop for the whole hour.  There were also people coming around offering us juice and stuff, so it was a nice start to the day.  When it was time to board everyone gathered together for the ceremonial “all aboard!” shout, and we were accompanied by a gentleman playing the bagpipes.  Not sure why, but hey, let’s roll with it. Then it was time to get on board. 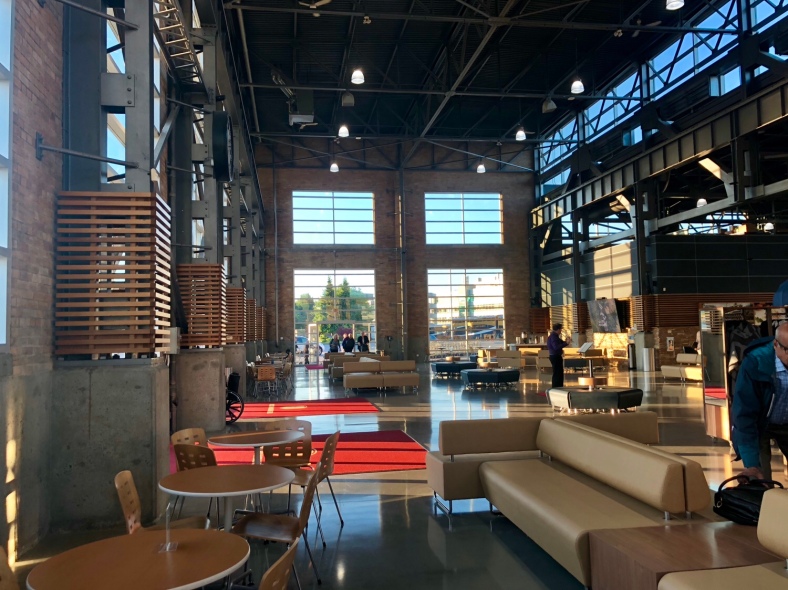 We found our seats, sat down, noted the in-seat power outlets (nice) and settled in. I spent five minutes repeatedly thinking I should be fastening my seatbelt ready for take-off, but no. In short, looking good! 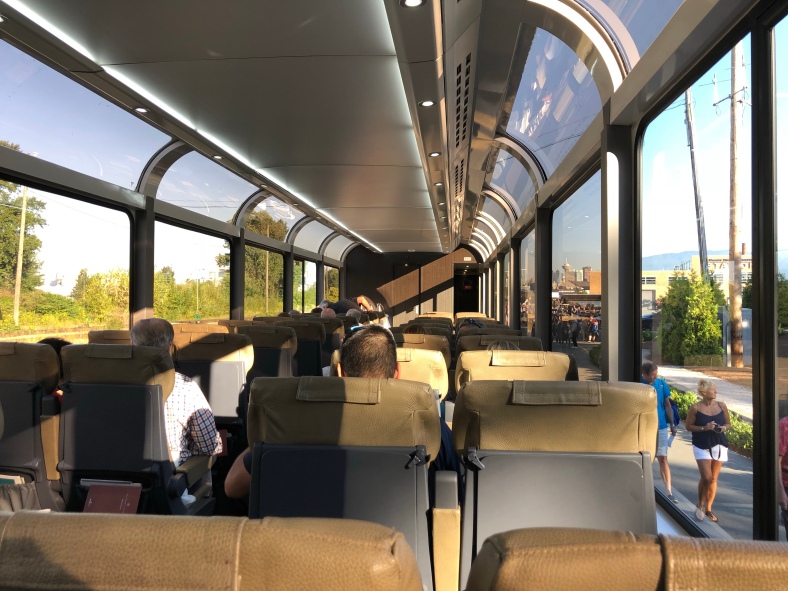 Before long it was time to head off. The train gave a lurch and we were off … backwards. Huh? Oh well maybe that’s just the way it goes. Some people hate travelling backwards but it doesn’t bother me too much. All the ‘ground staff’ lined up to wave us off, which was nice. 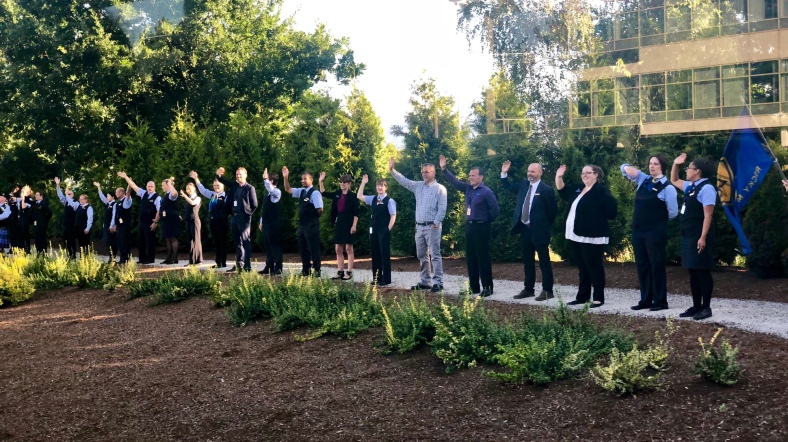 We were served a welcome juice drink, and greeted with a big Cheers from the train director … who then explained we’ll only be going backwards for a few minutes til we reach the main trail line. That’s better! Sure enough, we were soon heading off in the right direction.

We passed a budget Harbour Bridge, with a kinda-Anzac-bridge in the background.

I had a small but perfectly formed breakfast. 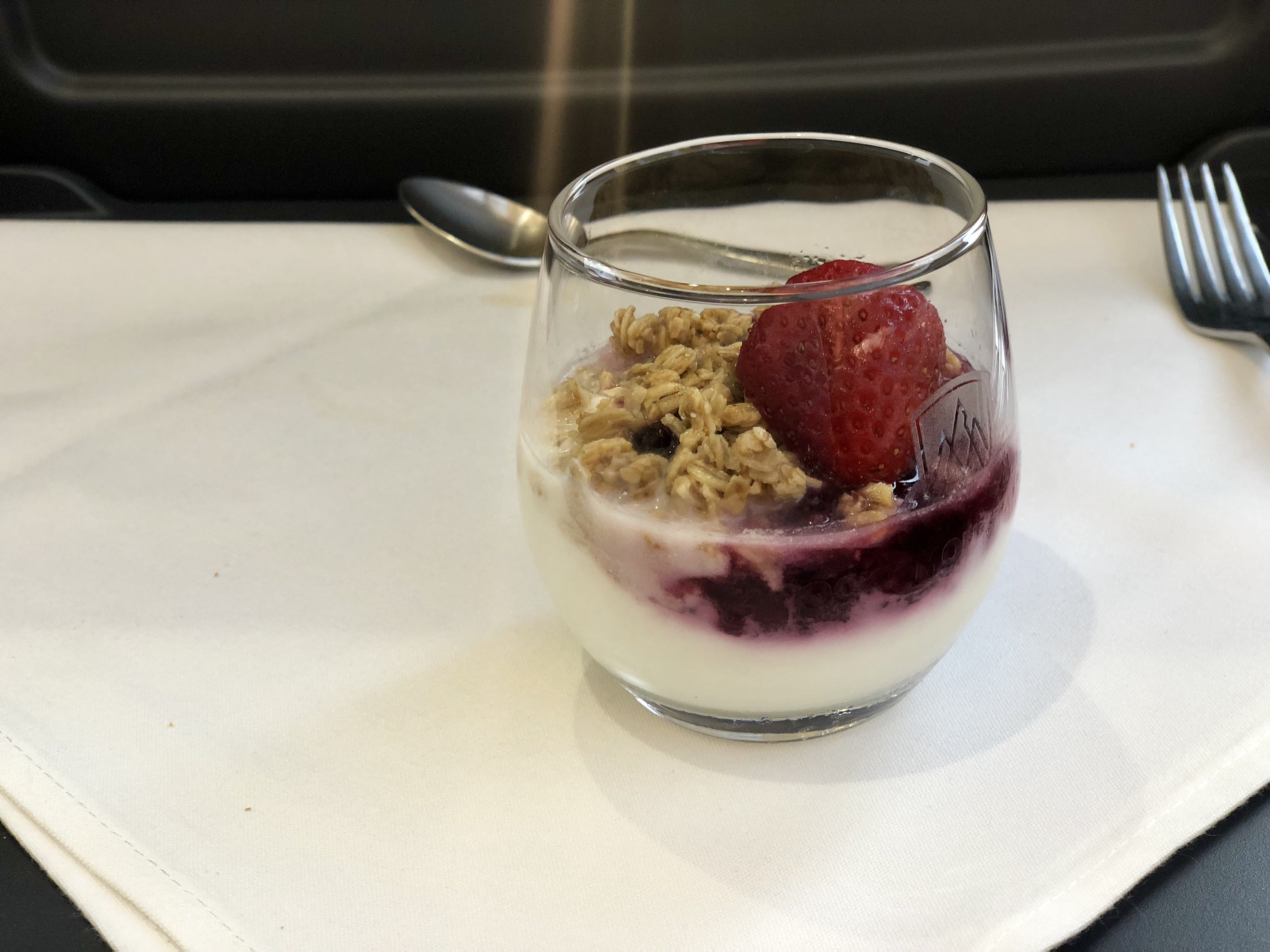 Before too long we wandered out of the city limits, receiving snippets of history and information as we went along from the two people looking after our carriage.

At this stage I get a bit lost for description, (or maybe it’s getting late and I’m just lazy) , but I was surprised just how much the landscape changed as we rolled on by. I’ll let he pictures do most of the talking.  If you hadn’t already noticed – pretty much every photos comes with extra reflections, free of charge – I was too lazy to go out to the small part of the back that was open to the elements, so all these pictures were taken through the windows. 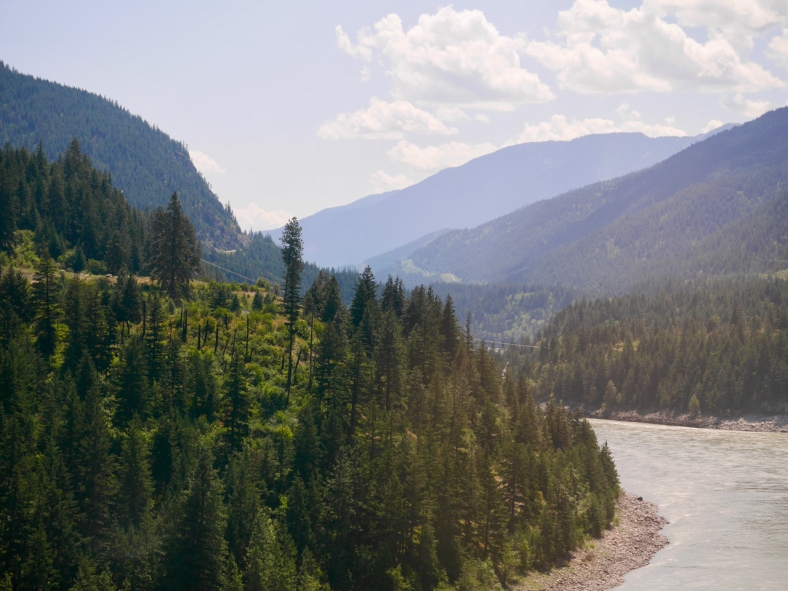 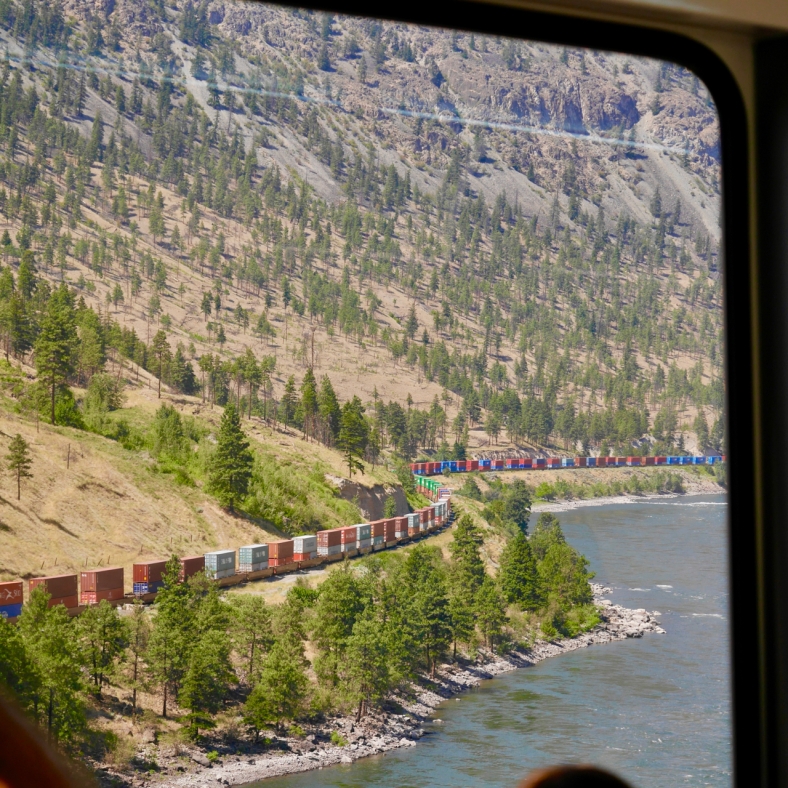 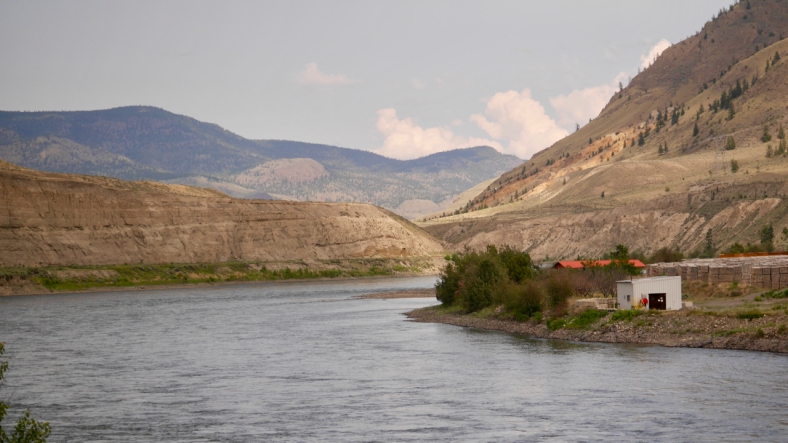 A little house. Is that a prairie?

Osprey nest on a rail bridge 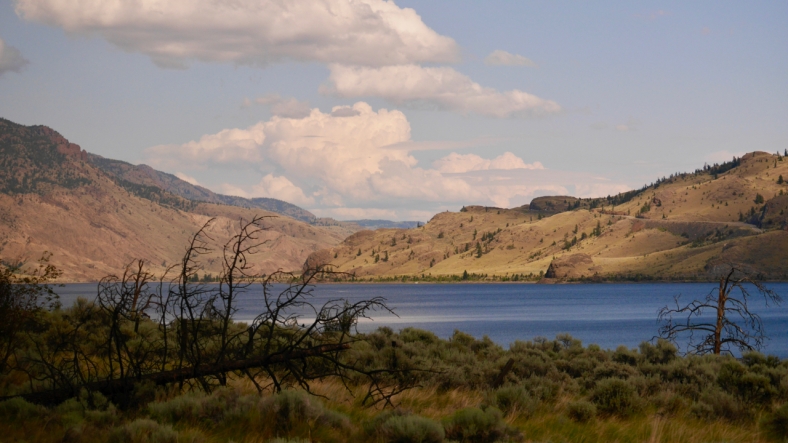 I never Canada reached such temperatures – it was about 33 degrees at the warmest part but the train’s aircon kept everything perfectly comfortable.  Food was excellent! A delicious tomato salad prepared right in front of you, so tasty.

A delicious lunch was served (grilled salmon in dill sauce), and a luscious brownie for dessert.  All of it was good!

We made it to Kamloops just after 5:30, pretty much bang on time, since the estimate is anywhere between 5:30pm and 7:30pm.  This is due to the shared train lines – a good part of the trip is just a single line, so depending on what freight is going we may have to give way.  We did stop a few times for 5-10 minutes at a time, which seems weird, but apparently this is just normal rail travel in northern america.  Quite the opposite of Europe and Japan, I guess!

Another excellent part of the serve is the way they handled the arrival at Kamloops.  When we got there, they handed us our hotel room keys while we still on the train.  All of our luggage was already waiting for us in our hotel room, no need to lug anything at all.  There were busses waiting immediately outside the train carriage to whisk us straight to the hotel – is was a very smooth and well thought out operation.  Even better is tomorrow morning – all we have to do is leave all the luggage in the hotel room, walk out (no need to even check out!) and get the bus back to the train station.  All the luggage is then gathered up and will be available at our hotel in Banff – even though we didn’t book it through Rocky Mountaineer.  Really impressive stuff.

After we reached our hotel we had a bit of a wander, had some excellent greek food – massive portions! – at Dorian Greek Restaurant, then wandered down to the nearby waterfront park.  There was a band playing, a good crowd, and beautiful views from the river.  It was one of those perfect summer evenings, still warm, still light, and everyone in a good mood.  Kamloops was much lovelier than I was expecting, since we had been warned “accommodation is of a moderate standard”. But no – the room is huge, and very comfortable.  Can’t complain at all. 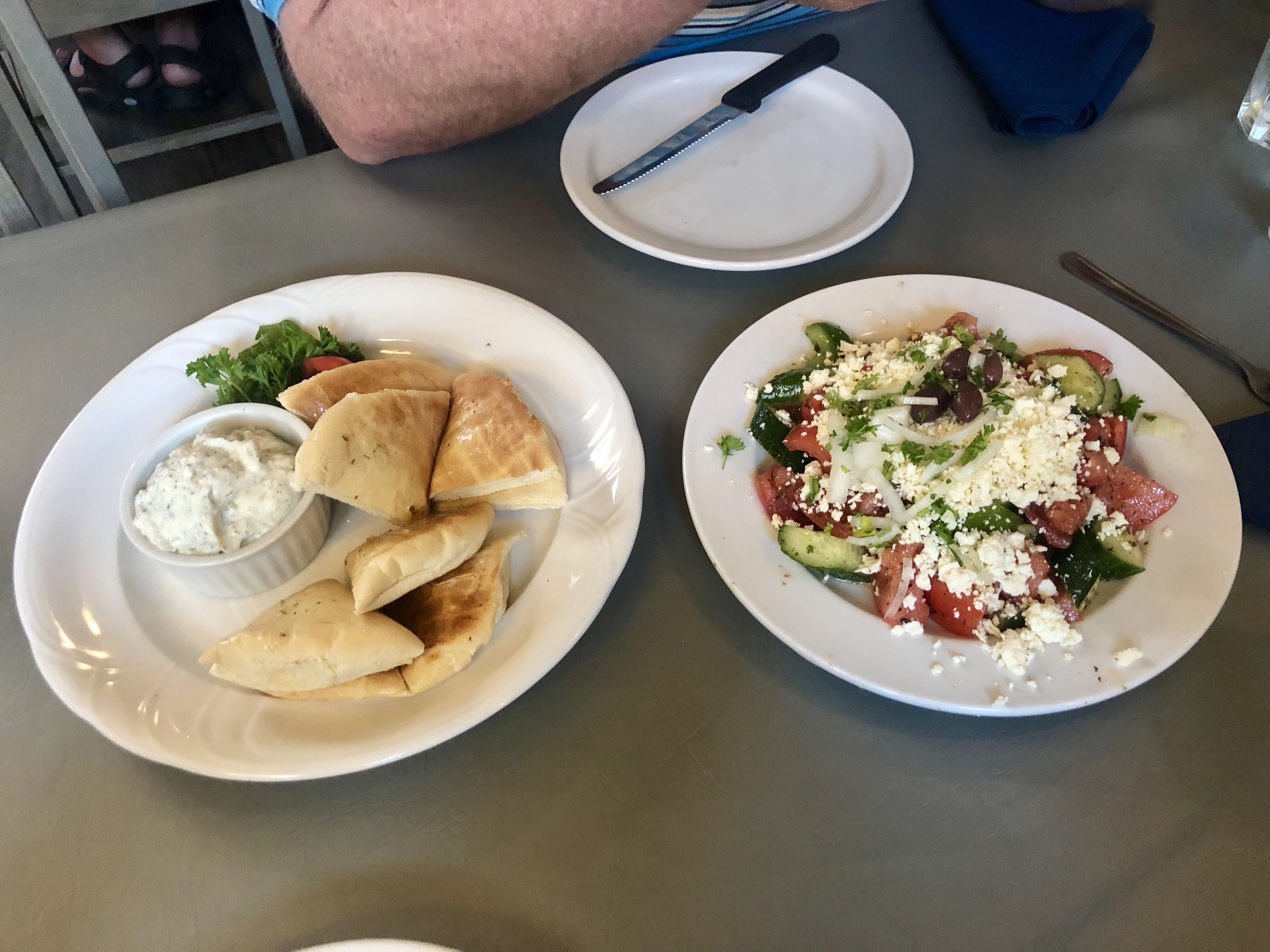 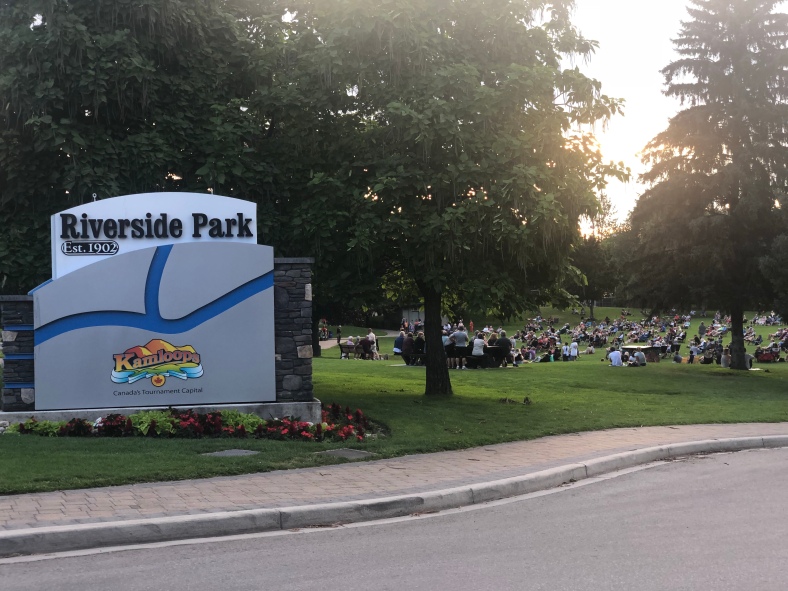 So, Day 1 of the Rocky Mountaineer has been awesome.  Looking forward to Day 2.  It all kicks off around 6am again, so I’m cutting this blog entry short and going to bed.  Night all!

One thought on “We’re here, we’re queer, we’re on the Rocky Mountaineer!”