Up and at ‘em a bit early today for a tour.  Last night it was weird going to bed when it was still bright outside – and it looked just the same at 6am.  Always bright.  It has been quite overcast so no telling really where the sun was.  Just this constant, somewhat grey, light.

Breakfast was interesting.  It’s kind rude to point out faults – but I think they were caught a bit unawares about an influx of more than the usual number of customers on a Saturday. As a result, I think things were rushed, things were missed, but we did eventually still get fed.  French toast and cubed fried potatoes, that’s a new breakfast sensation…

Our tour around Anchorage was good – glad we had to chance to get off the main street grid.  Fun fact, avenues are numbered, Streets are lettered,  from A to R or so.  So yes, you can live on “A Street”. Don’t we all?).  It must be a challenge getting mail if you live at “1 I St”, depending on what font you use.  But, it does make it easy to get from A to B  😀

We went to a small kind-of-museum but not, more an empty space in the ground floor of a mall, which had a lot of interesting info about the 1964 earthquake.  It was massive (8.6), an lasted 5 minutes, which I can’t imagine what that must have been like.  A whole town was literally wiped off the map, the surviving residents were moved miles and miles away to start again.  A few other towns ended up around 50 feet away from their original locations, just from the face of the earthquake.  It also destroyed the commercial port operations of the town of Whittier, which were never rebuilt.

We saw Ship Creek, where only today fishing was allowed to recommence, it had been stopped for a few weeks to give the salmon a chance.  There are pretty strict rules around fishing – it’s all licenced, and most fishers are allowed to catch 3 salmon a day, or more if they have a larger family.  There were other rules about other type of fish, but I wasn’t getting too close to the guy at Ship Creek who was busily gutting a salmon right in front of us, to hear all the details  Not so soon after breakfast, thanks.

Next stop – The Uru Factory.  Whereupon, the great mystery was finally revealed.  What’s an Uru?  If you’ve ever seen  Mezzaluna blade, you’ve seen an Uru.  A rounded knife where you chop everything with a rocking motion.  THey’re great for chopping herbs or nuts, for example.  We didn’t buy one.  So at this point of the tour, we were, quite literally, up Ship Creek without an Uru.  Nearby was the main rail yard of Anchorage – where the train horns were on full blast, often.  Our tour driver also navigated about 5 level crossings in the space of about 30 seconds, which was a pretty good effort.

Whilst driving around we had the good fortune to see a moose – I put my fancy new zoom lens to use and managed to achieve some at-least-mediocre shots of her. 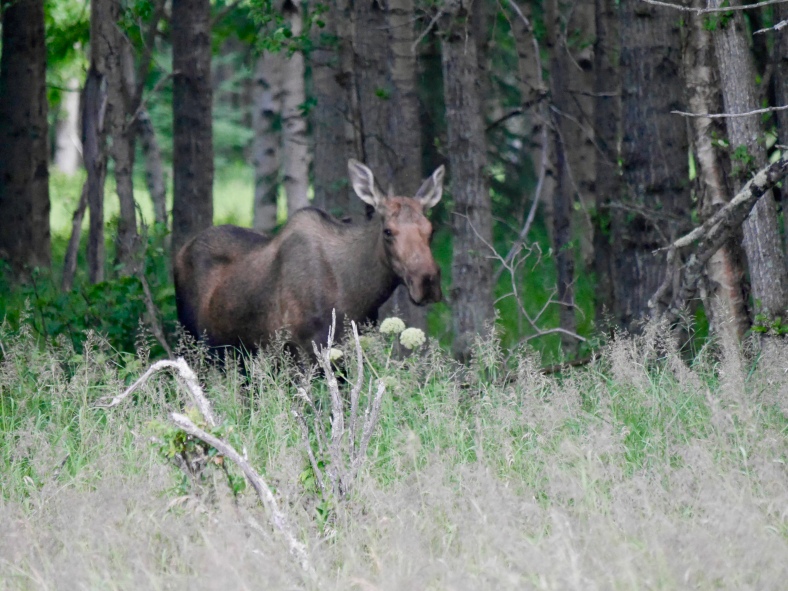 This was near the airport – the commercial airport and the less commercial (and less airport-y) Lake Hood and Lake Spenard.  Alaska is a pretty big place.  And there’s a whole lot of it that isn’t serviced by roads.  So people use planes here, a lot.  And that means a lot of planes.  They nearly all have pontoons for water landings, and they all live around Lake Hood and Lake Spenard.  I’d never seen so many little planes gathered together before. 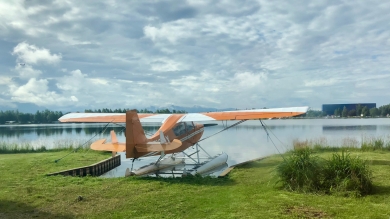 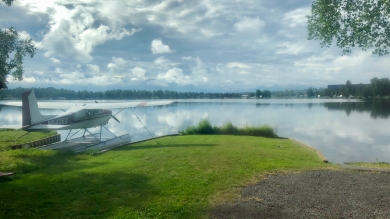 Zoom in a bit and you’ll see what I mean.  Heaps of planes.  We hear them quite often as they buzz over head, off to wherever it is they’re going.

It also lead a case of “well, you don’t see that street sign every day…” 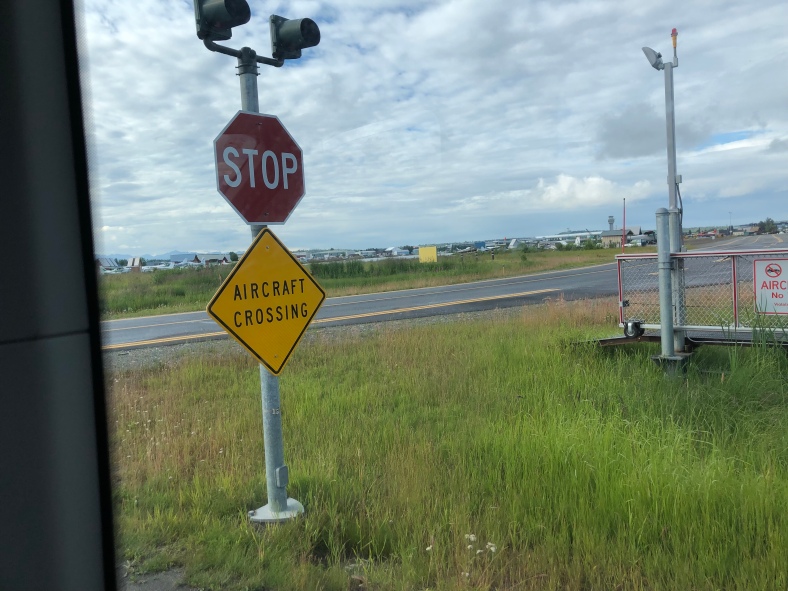 Alaska Wild Berry products was our next stop – home of “The world’s largest chocolate fountain”  – which may or may not true. And who knows, it may or may not be chocolate.  But they did have lots of lovely chocolate and fudge on sale.  I picked up some fudge – choc-mint, and maple-walnut, both of which were very tasty.  I mean it’s just sugar sugar and more sugar so how can it go wrong. 🙂

The next stop may sound a bit odd to do on a touristy adventure around town – but we went to a hospital.  Nope,  no sickness or injuries among our touring friends – the Alaskan Native Medical Centre (I guess I should begrudgingly spell it ‘Center’) is a large hospital dedicated to the Native Alaskan population.  But still, why are we visiting it?  It hs some amazing displays of Native Alaskan arts and crafts spread across several floors.  It helped to highlight the resourcefulness or naive Alaskans, and in a way the respect they’d show for the native wildlife – anything that they killed, they found a use for pretty much the entire animal.  For example bags were made out of stomachs of animals, nothing was wasted. It was a really interesting display of the ongoing culture of native Alaskans, and a testament to the skills of the artists, both ancient, and current. 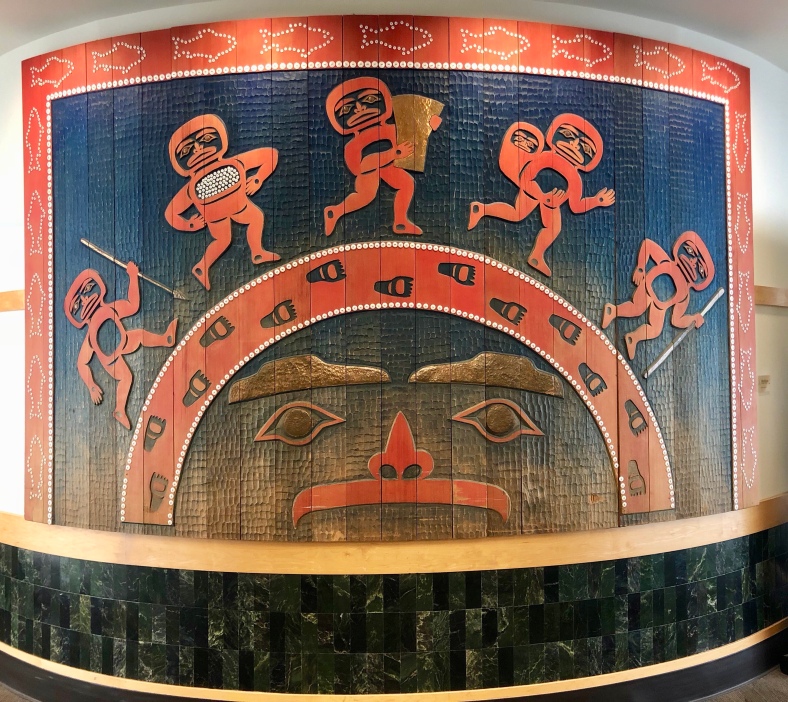 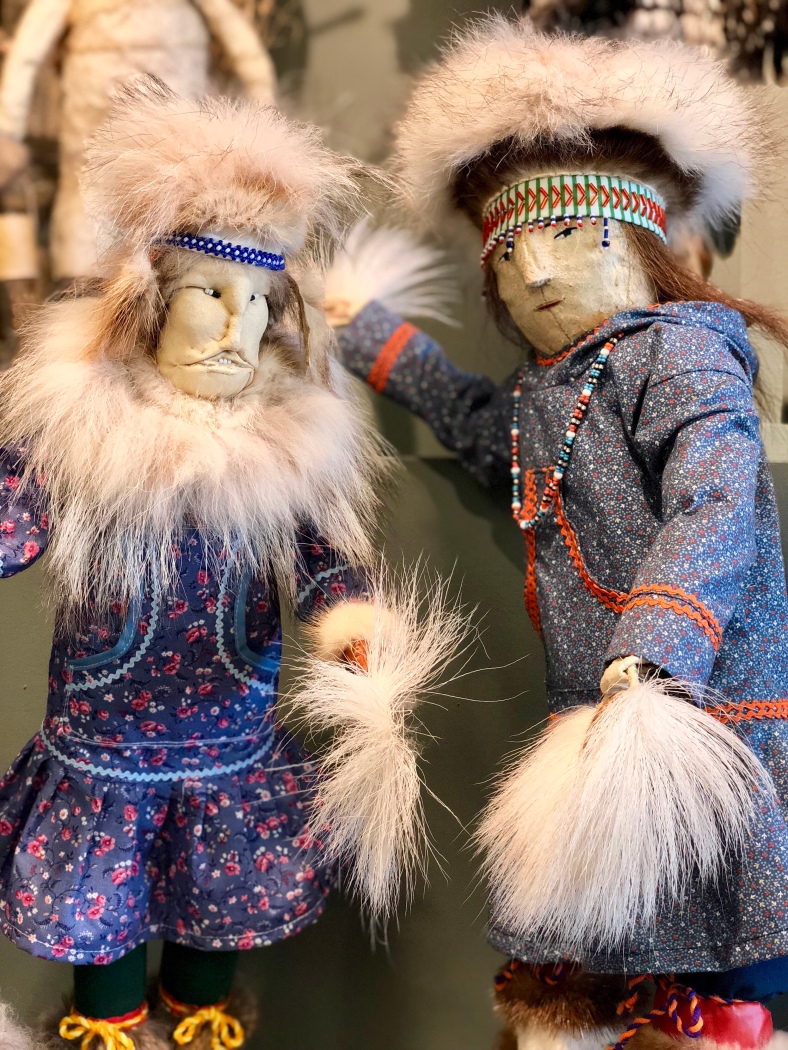 Last stop of today’s tour was “Alaska Sausage and Seafood” – well, ok, why not?  We sampled some reindeer sausage, and secretly apologised to Santa for doing so. Tasted just like regular salami … so maybe there’s something the regular salami makers aren’t telling us?  I also found a jar of Knoblauch.  I don’t know what it does, but it did make me giggle. (This blog does not come with any guarantee that its author will always act like a grown-up). Knoblauch! hehehe.  The whole shop had a large european influence – with Droste coca, Ritter chocolate, and a shedload of Dr Oetker products. 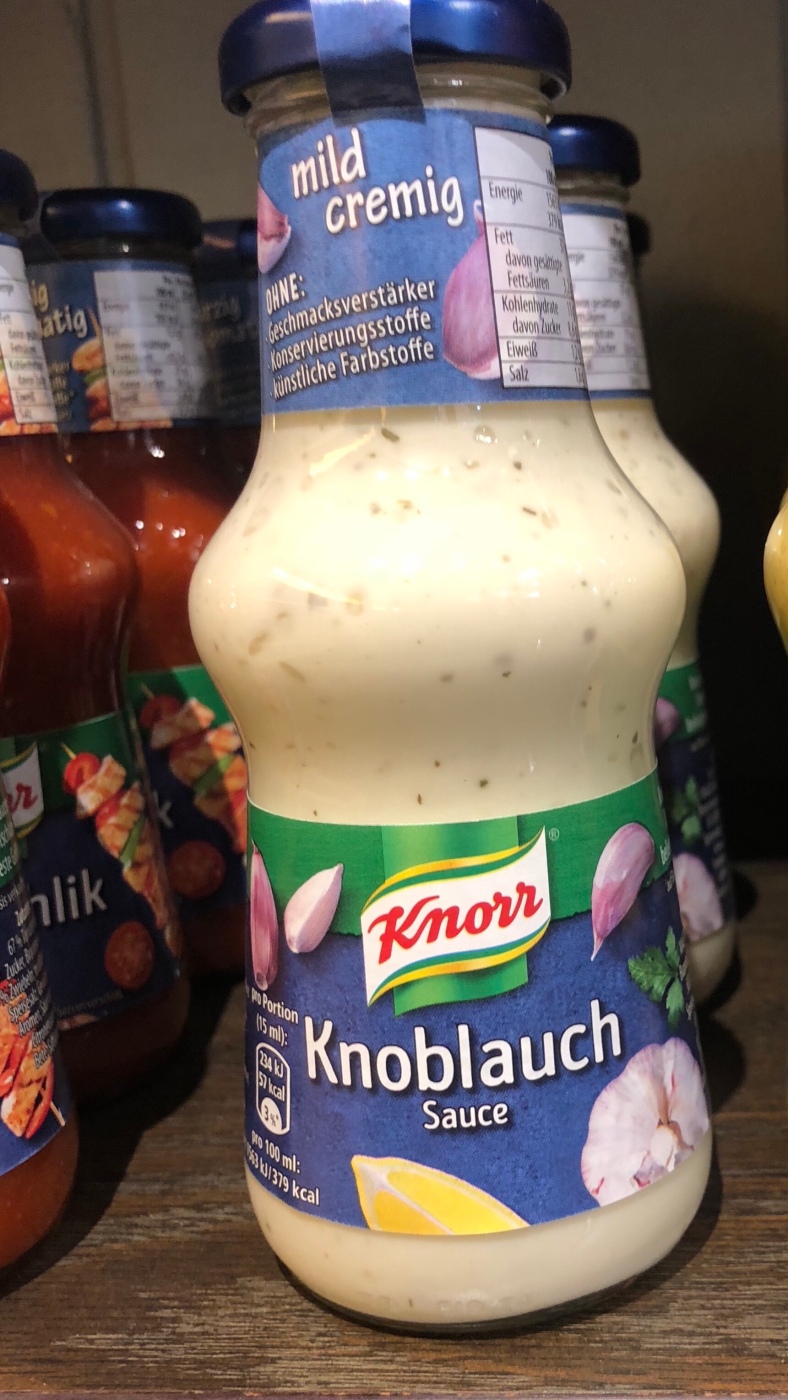 With the tour concluded, we headed off to the Saturday market.  Could it get any more Alaskan than this street sign … 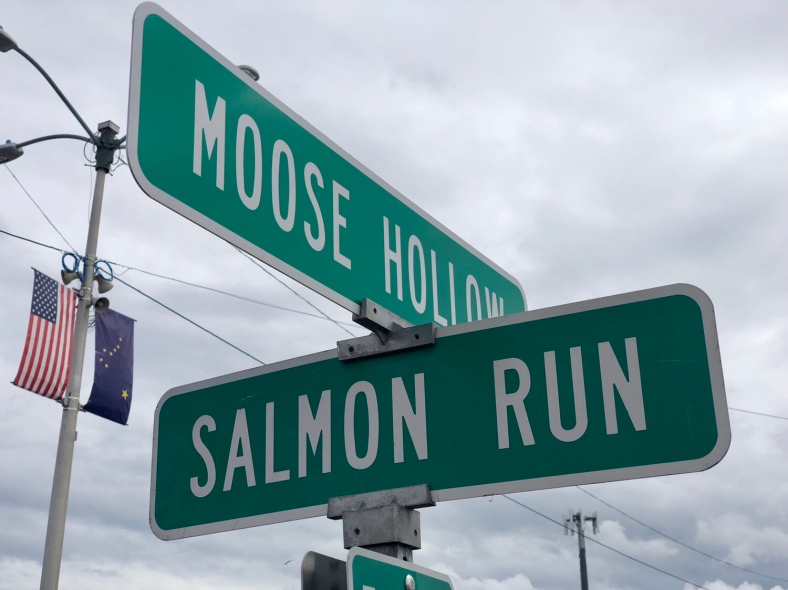 We bought some cinnamon scrolls for tomorrow’s breakfast, then checked out the local mall.  It has an Apple store!  Of course even though I didn’t need anything I had to go and have a look.  I wandered around the mall while Perry went back to the hotel for a snooze.  One thing about Anhorage  – it’s not a huge town, so everything is pretty close to everything else.  I think all this holidaying is starting to catch up with me, I ended up having an unexpected nap on the lounge in the hotel, but it’s not like we’re going to run out of light in the day!

For dinner we visited “The Slippery Salmon” – and enjoyed ridiculously large meals of meatloaf, and ribs.  I also had an ‘Angry Orchard Hard Cider’ – which wasn’t angry, it was a very sweet cider, almost like drinking apple juice just with  bit of an alcoholic kick. 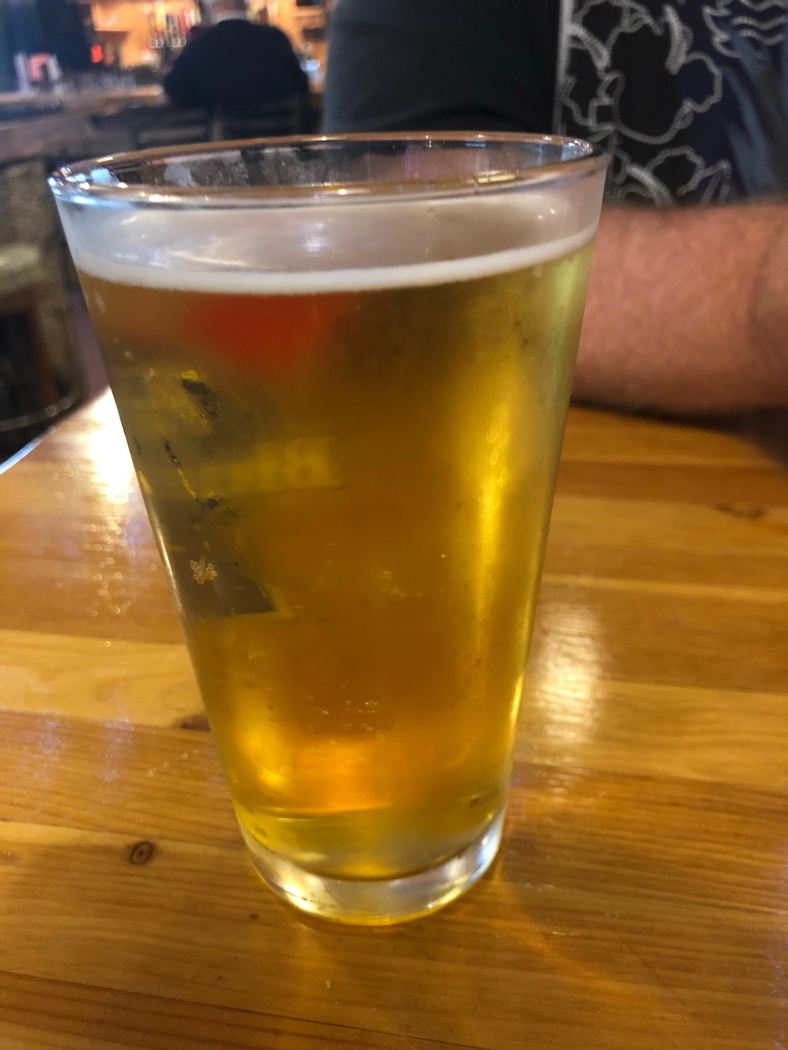 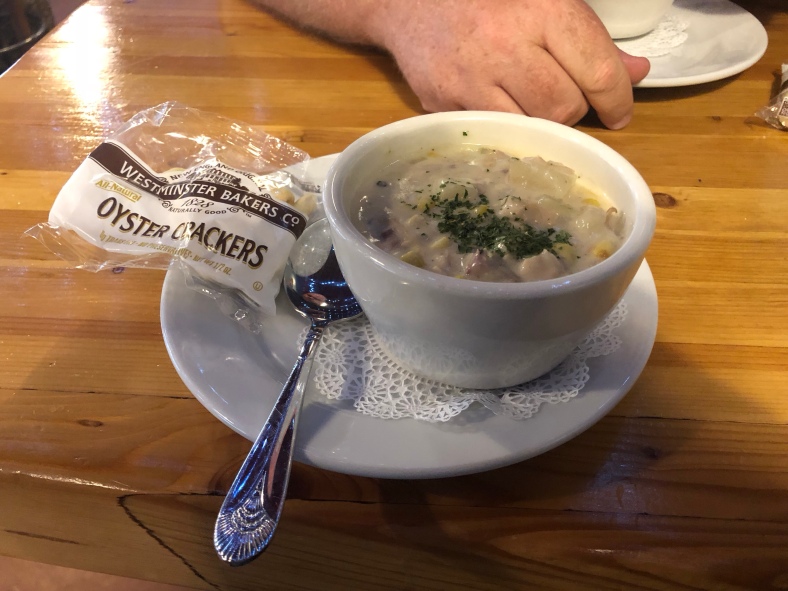 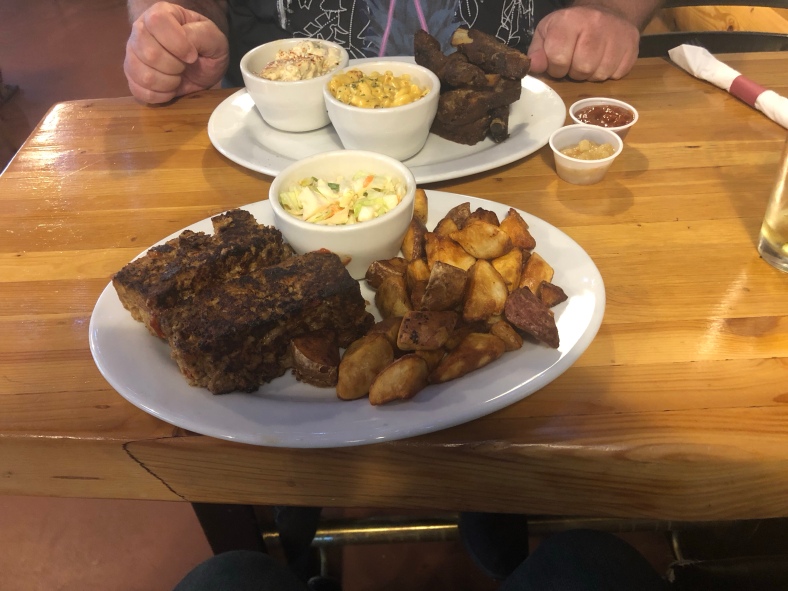 Back to to hotel via the fireman’s memorial park – if only so I could say “look how light it is and it’s already half past nine!”

It’s kinda weird to think even though I’m finishing this up at 10:30pm, it’s still as light as anything outside.  My eyes say it doesn’t feel like it’s time to go to sleep, although my body is telling me otherwise.

Tomorrow – time for a change of scenery as we head down to Seward, and start our cruise!  Just a heads-up that blog entries might get a bit thin on the ground after this – depends how much the cruise line wants to gouge us for internet access.  Just assume that no news = good news! And no news also probably equals a stupid amount of photos once we’re back online.  Anyway, as always, lets see what happens.