We hung out at Pike Place Market to kill a bit of time before today’s next adventure, the ‘locks cruise’.

So – Seattle is just like Camden, right?  They have locks to help the boats cope with changes in the water level.   OK so they’re very, very different but not to worry.  The lock we travelled through today was to seperate the tidal and saltwater Puget Sound, from the higher, non-tidal, freshwater Lake Union and Lake Washington.

So we boarded the “Good Time III” and off we went.  Happy to say we could still see Mt Rainier, and the ubiquitous Space Needle.  Lots of little planes flying around, too.  Well, at least one or two. 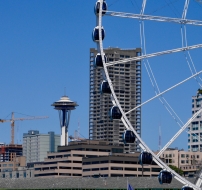 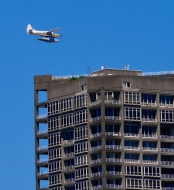 We passed by the WaterEdge hotel – still considering its famous for having the Beatles stay there in 1964 or so – there’s a photo of them fishing out of the window, as the hotel is indeed on the edge of the water.  There’s a bit of info about it here: http://www.meetthebeatlesforreal.com/2014/08/beatles-at-edgewater-hotel.html 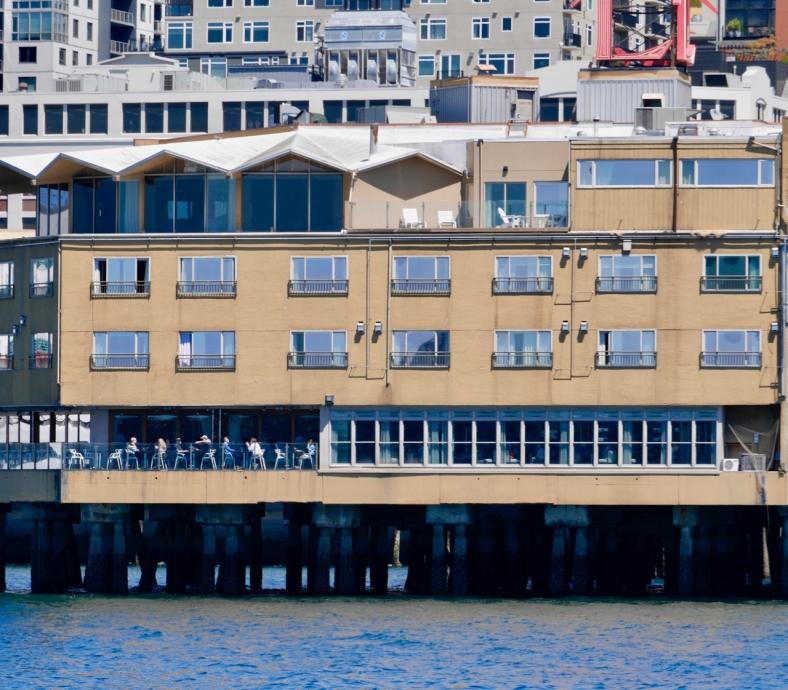 The EdgeWater hotel. On the water’s edge

The hotel was built for the 1962 World’s Fair – a big deal, that caused many other new things to be built, the Space Needle being the biggest one.  Unfortunately not everything goes according to plan, especially when trying to built a hotel over water for the first time ever, so the hotel successfully opened … two weeks after the World’s Fair had closed down.  They marketed it by saying you could fish out of the windows, and indeed you could.  They even had a bait shop on the ground floor.  But once you caught a fish and hauled it up a couple of storeys … well, hotel rooms aren’t renowned for their fish-processing equipment. Things got messy.  And I can’t being to imagine the smell.  Apparently though they didn’t ban fishing from the windows until the 1980s.

There was also a cruise ship in dock, the tour guide on the boat noted that in the last few years Seattle has become very popular port for cruises. 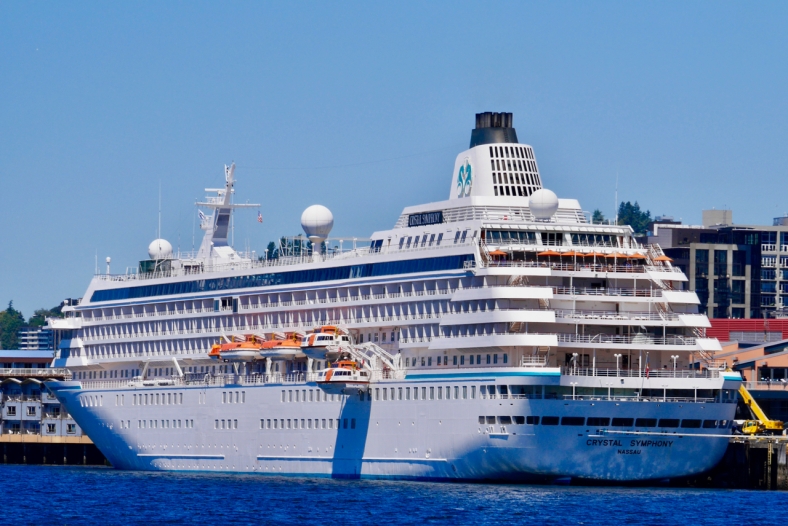 Up through the Puget Sound we sailed, past pretty-but-landfall-prone Queen Anne, and past a particularly short light-house.  This is due the water not being so deep so that boats weren’t so big. Something like that.  It also happened to line up nicely with Mt Rainier, which was still just making itself visible: 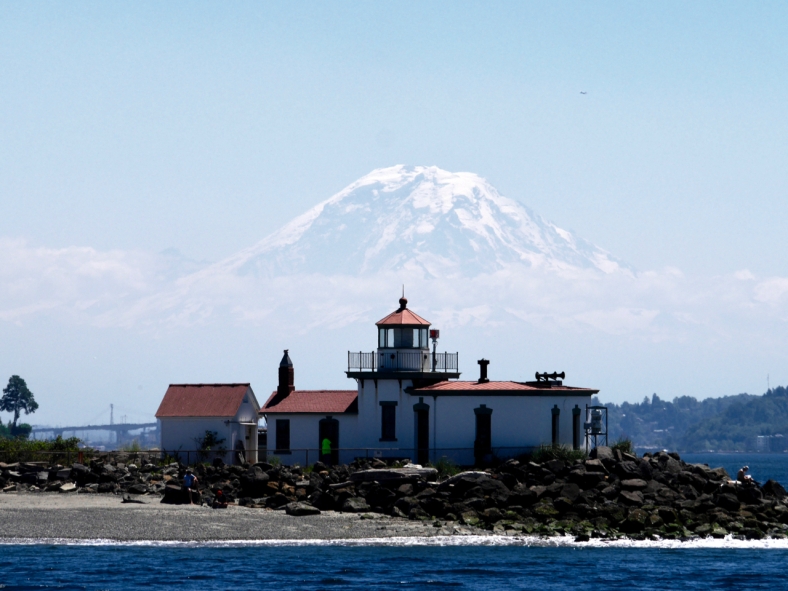 We also saw the mountains that weren’t Mt Rainier, but still pretty.

We hung a right at Shilshole bay, past a number of what must have been expensive houses, and of course if you live there you must have your own boat.  Now anybody who knows anything at all about boats (note: this is totally not me) would now that for your boat to last longer, you really should keep it out of the salty water. It’s not the best thing for boats.  What’s the solution?

That’s right – a boat elevator.  At least I learned stuff on this cruise. 🙂

The next bit was really interesting.  It’s not unusual to have a rail bridge going over the water, right?  That may even have been the long-rumoured missing verse of the Tom Jones song. Who can say.  It’s also not that unusual to have a bridged that raises part of itself up to let taller boats go through underneath.  So far, all normal.  The different part about this bridge, is that its mostly there for the benefit of the boats rather than the trains.  It spends most of its time in the open position, blocking the train track but letting the boats through,  It’s only when a train comes through that the bridge lowers back down, kinda like a ginormous version of a barrier at a level crossing.  Luckily enough this happened while we were passing by.  I did take a video, but oo-ee was it kind dull. If I do a speeded-up version I’ll post that some time.  The bridge itself, though kinda looking like it was ready to all apart, sure looked interesting.  It was a counterweight bridge – meaning it had this massive several-hundred-ton lump of metal on one end, to counteract the weight of the moveable rail parts. Here’s how it looks most of the time – it’s really quite a striking figure. 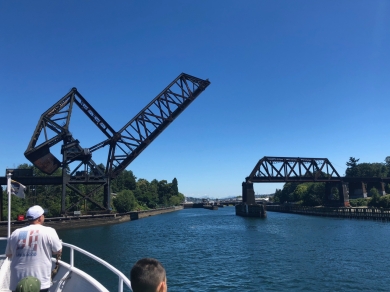 Kinda stands out, right?  I can’t imagine it having any chance of being built these days, so close to all the fancy houses whose owners probably have a PhD in Nimby-ism.

I even did a ye-olde-worlde version of it when it was closed, since it looks kinda old and falling apart.

And here it is with the freight train on it, to give a sense of the sheer scale of the thing.

Just beyond this bridge was the lock.  There are two locks, big and small.  Our boat fits in the small one with less than a foot spare on each side, but they expertly piloted it in.  The are with the lock also has a spillway if the lake level gets too high, and a fish ladder, so the salmon can still make their way upstream even when the lock is closed.  A few clever salmon decided to use the lock along with the boat, though.

There was also a sealion supervising proceedings nearby, which was pretty cool,

Now I know the whole point of this cruise today was to see the locks – but I successfully managed to not get any good photos of it, mostly because everyone else rushed to the front of the boat before I did.  But hopefully this tells some of the story. Sorry about my wonky camera work.

After going through the lock (and being lifted 13 feet higher in the process) we proceeded past a number of tug bots and commercial fishing vessels, and the town of Ballard.  Ballard had remained seperate from Ballard for quite some time, until ultimately it wasn’t terribly well managed and had to go begging to Seattle for drinking water, and in exchange the town had to start paying taxes and basically be annexed by Seattle.  They still try to maintain a it of an independent spirit, allegedly one of their popular bumpers stickers is a tongue-in-cheek “End the 100 years of tyranny!” message. 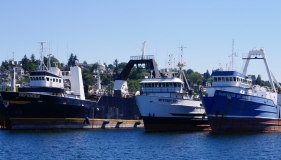 Not far out of Ballard, we reached Lake Union proper – the same place we cruised around yesterday in the Duck.  There were a few more people out today, including a dog on a stand-up-paddle board.  Alas if only it was a stand-up-poodle.  At least I guess it was dog-paddling…

We also passed under the Fremont bridge, only about six inches taller that the boat is.  They had to fold down the aerials and even the flag, before it would fit under. 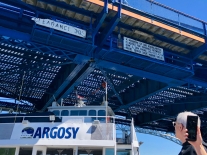 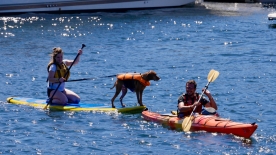 It was in Lake Union that our tour completed – but not before we had the good fortune of watching a sea place take off close by, that was pretty cool.

The tour didn’t end where it began – there was an option to take a boat back to Pier 55 where we began, but that wasn’t going to save us any time compared to walking, so we walked back to the hotel.

It was here I tried the in-house Starbucks coffee with the drip filter.  I don’t know if any Americans are reading  – but Australia pretty much gave up on the drip filter in the 80s.  But glad to see there have been some innovations since then.  Instead of having to tip ground coffee into a filter, there’s now just a big coffee bag that sits in the percolator, makes life easier.  (Still not as easy as popping a Nespresso pod in the machine at home, I gotta say)

I switch on the machine and minutes later, ta-da! A cup of, well, pretty awful coffee. Way over-roaster as seems to be the Starbucks tradition, and it was decaf, so … yeah.  (Still better than brekky in Auckland, just sayin’!). Ah well, at least I know now.

For dinner, we had to go back to Pintxo.  There were so many things on the menu that still looked so good, we had to go back to try them.  And we were not disappointed.  A charcuterie board. We had an incredible toasted bread with tomato, vinegar, and oil – kinda like a bruschetta only much better behaved as the tomato was reduced almost to a paste. A delicious, none-more-tomato-y paste.  We had pork sausage with apple puree. Again, everything was delicious, not a bad dish on the menu once again.  The ‘infused G&T’ was also pretty remarkable.  So glad we went back – our waitress (yeah, we’re that close, we calling her ‘ours’ now) remembered us (well it was only a day) and was again really friendly and really good at her job.  Seriously impressed with Pintxo. 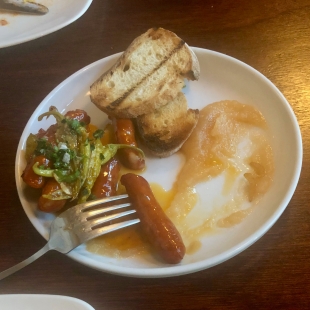 I’m seriously impressed with this guy, too 🙂

Tomorrow is the last full day in Seattle… we have plans, and course, you’ll hear all about it soon.

One thought on “A Locks cruise, and a return to Pintxo”