As you know our flight was delayed four hours, so a further 20 minutes wait wasn’t a big deal, we eventually took off a bit after 5.

We were on an old 747-400 – but I gotta admit it was a bit of a novelty to climb the “stairway to heaven” to get to the small business class cabin on the upper deck. With only about 8 rows of that, it was like being on your own mini-plane. 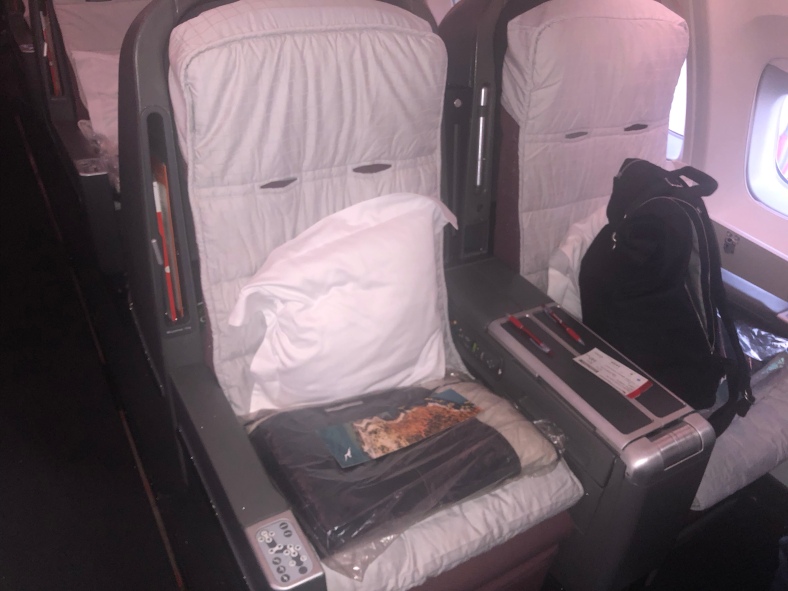 Qantas staff were great once again, very friendly, and the usual champagne-upon-boarding was a welcome touch.

Since the plane was about 100 years old or so, there were no USB charging ports on board (oh, the horror!) but somehow we survived. The seats were the old pod style – comfy enough even if the bed wasn’t quite up to scratch, but more of that in a bit.

The onboard entertainment was entertaining in its own way…once the fold-out screen finally decided to turn on after a bit of prodding. It even had games… from the 90s. Breakout, snake, solitaire… real cutting edge stuff. Even the handset looks like it could’ve been an old Nokia from the same era. I don’t mean to sound ungrateful – after all I did get though a whole level of Breakout 🙂 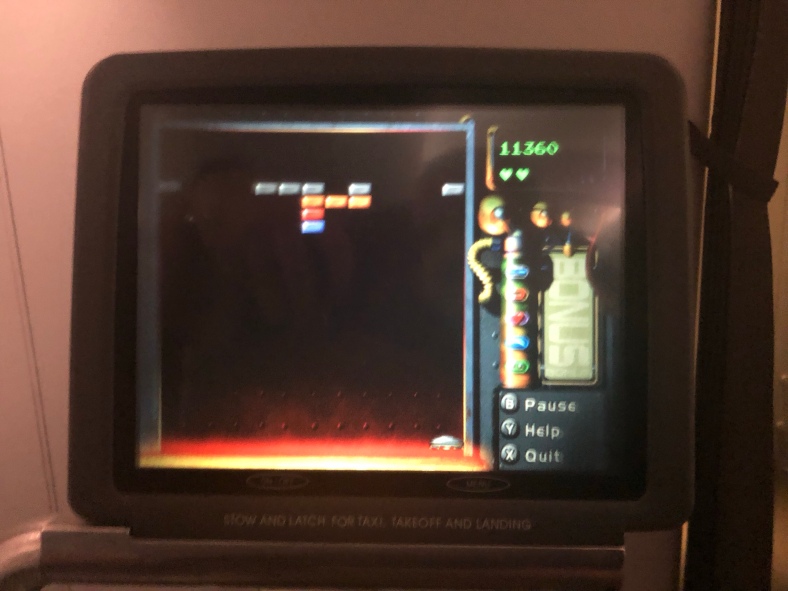 Could well be a Nokia used to control the Entertainment system

Service may have been excellent but the food was a wee bit underwhelming – a chicken focaccia sandwhich that might’ve been prepared by the same team that did breakfast st Auckland – really dry and a bit overdone. But this was followed by ice cream, which of course fixes everything.

Shortly after dinner all the lights in the cabin suddenly went out – so either there was an electrical problem, or it was time to go to sleep (don’t worry, it was the latter.)

They kindly supplied a soft seat covering and a mini-doona, in addition to qantas-branded pyjamas (nah, didn’t try them). The seat stretches itself right out, but it doesn’t lay completely flat, you still lie down at a bit of angle. So eventually you yourself sinking down to the end of the seat, and have to crawl your way back up. They’d set the aircon to somewhere between ‘bake’ and ‘roast’ so it took ages to get to sleep coz of the heat. Still, ended up getting some good chunks of sleep until about 2.5 hours before landing. I think getting rocked to sleep by the constant low/level turbulence was actually helpful – nearly the whole flight we were gently jostled to and fro, up and down… shaken but not stirred, I guess. 🙂

Anyway before we know it it was time for (a very nice) brekky and swiftly after, hello San Francisco! (Or hello LA if you believed the initial cabin announcement after landing)

I can see a runway – must be nearly there.

The queue at customs was ridonculous – took us a good two hours to get through I think. But once that was over our car turned up (a Chevy Ginormous of some sort) and whisked us away to the lovely Chancellor Hotel. We spent he 30 minutes waiting for the room to be prepared, by popping in to the nearby Apple shop (beautiful!!) an then a drink at Starbucks, which are of course everywhere. Iced coffee doesn’t have milk. But it was really tasty. 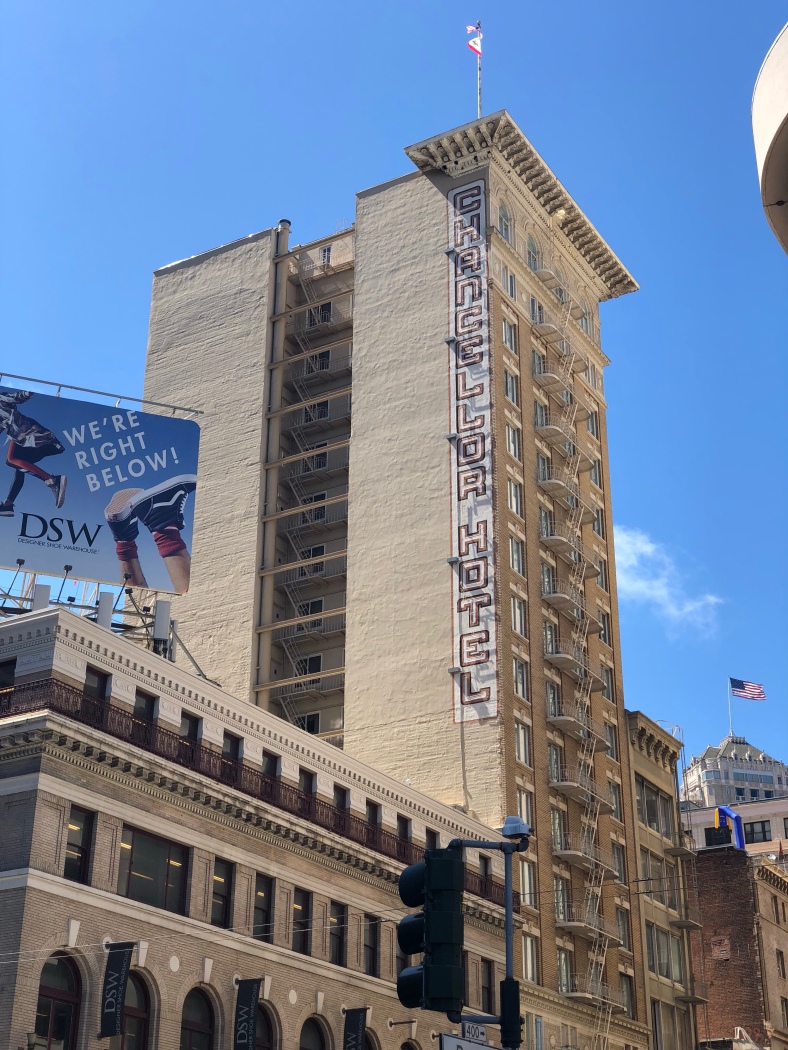 The hotel room is really nice, not large but a bit bigger than I was expecting, so that’s always a bonus. Not that we had long to check it out – once we got in it was time to turn around and head out to the 4th of July fireworks harbour cruise we’d booked ages ago.

On the way I topped up my ‘Clipper’ card (like an Opal card, an Oyster, a Suica card, etc) – was pleasantly surprised to see my card from 5 years ago still worked a treat.

The boat , San Francisco Belle was really big – an old paddle steamer. Except it was built in 1994 and runs on diesel, but near enough. It was plenty spacious and the buffet dinner was nice. Sun didnt set til after 8:30, a nice change from Sydney at the moment. Sailing underneath the Golden Gate Bridge was a treat, and of course I took way too many pictures. 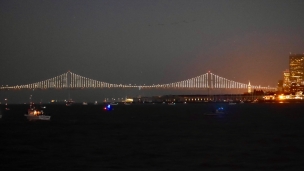 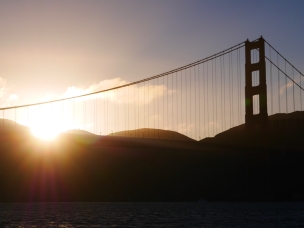 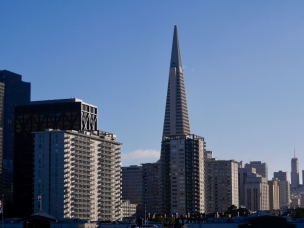 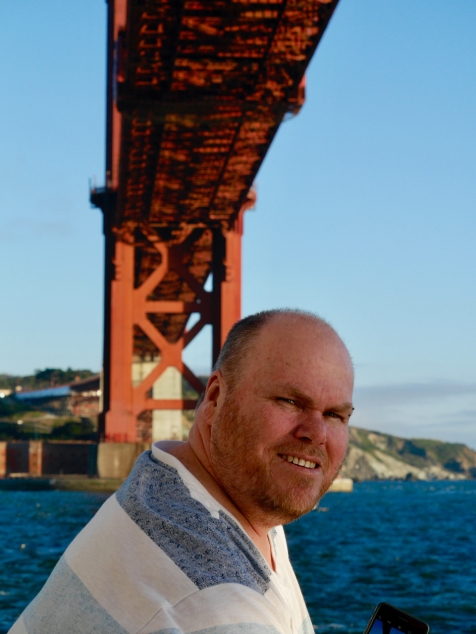 Considering our July 4 has been going for something like 36 hours at this point, we’re still standing though by 9pm a bit of tiredness was starting to sink in.

Still we hung in there for the fireworks, which were impressive, but no Sydney NYE of course 🙂 It was bloody freezing out there – I’m sure the breeze was straight from the arctic, geez! 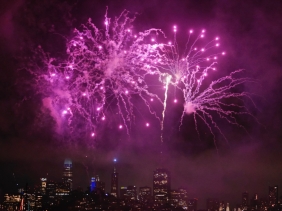 Once the boat returned to port at 10:30 – we were very good and did the 30 minute walk back up to the hotel, while on the way, crossing a quiet street, there was small rustle, a quiet nose of rubber on asphalt, and a little man whooshed by, his grey hair streaming out behind his slightly battered top hat in a kind of wavy celebration of the speed he had attained.  It was then we also realised – he was riding a unicycle.  Of course.